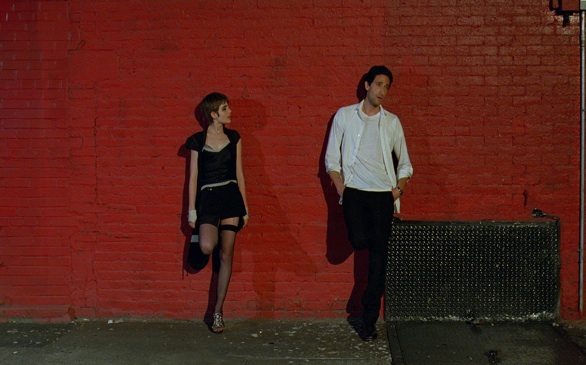 There’s nothing lonelier than the life of Henry Barthes (Adrien Brody), a withdrawn substitute teacher whose tormented past has forced him to isolate himself from others. After drifting from classroom to classroom, things begin to strangely fall into place during his latest assignment. Brody, who is near perfect as a detached soul of a man, plays it close to the chest as we get a glance at his descent into the pain that comes from caring for others.

Detachment truly taps into the unspoken reality teachers in today’s schools face. Principal Carol Dearden, as played by Marcia Gay Harden, gives a powerful performance as a leader who must watch as her school slips out of her fingers and into the hands of administrators. The teachers are all on the verge of meltdowns, among them guidance counselor Dr. Parker (Lucy Liu) and teacher Ms. Madison (Cristina Hendricks), who question their ability to make a difference in their students lives, a thought that disheartens them and causes a lack of motivation and low self-esteem.

Henry, whose one-day assignment has turned long-term, fights to have his students see their worth. In a school with a crumbling education system and worn-out teachers, he unwillingly accepts the task of being a role model for his kids because no one else will.

His life encounters a new twist when on a desolate bus ride back from visiting his dying grandfather, he meets teen prostitute, Erica (Sami Gayle), and offers her shelter. It takes some convincing and shaking around to bring Erica out of her old ways, but they ultimately form a bond and become a nice little family –until reality sets in.

For a man who tries so hard to purge himself from all human connection, Henry can’t hide his talent for connecting with his students. But sure enough, as he becomes witness to the neglect the teachers endure, watching helplessly as they waste away and become ghost-like, he finds himself wanting to run away from it all.

As his grandfather’s health gets worse, everything begins taking its toll on Henry, and he must grapple with a dark and painful secret from his childhood. Erica, who is no stranger to abuse and loss, becomes quite supportive, but he ultimately must deal with this truth on his own.

Detachment is a true testament to the aloofness teachers must maintain from their students, as to save themselves from the guilt that comes from not always being able to shield them from a forsaken world. Full of compelling performances and poignant views on education, family, and the blurred line of life’s significance, Detachment will take you on an emotional and worthwhile ride.

Detachment releases in L.A. on March 23.