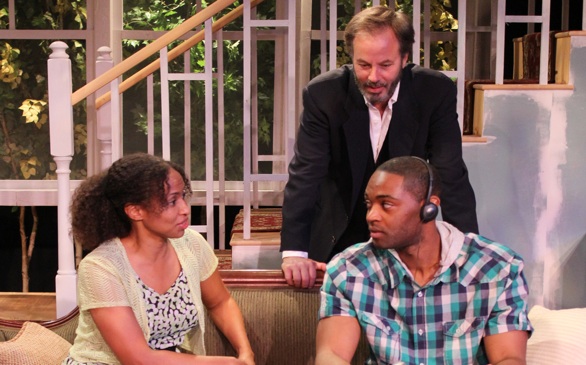 Perhaps the most effective element of EST/LA’s production is the talent. In Los Angeles, a town where theater comes second to film, it is not unusual to find shows where on-camera personalities unsuccessfully attempt to adapt their craft to the stage. In this show, this is not the case. Well adept to the intricacies of performing for a live audience, this cast is delightfully impressive as they inject the storyline with humor, emotion and thoroughly considered detail.

Centered on the efforts of lead Philip Casnoff, this show is really held together by the performances of the ancillary cast. Two performances that particularly shined were that of Carlos Carrasco as Augustus, and Theo Perkins as Anquan. Taking on the complicated role of the play’s antagonist, Carrasco displays his effectiveness as a veteran actor. Including elements of detail to his action, composure and speech, Carrasco’s performance serves to remind the audience that this cast has definitely spent a lot of time doing their homework.

Similarly, the performance of Theo Perkins as Anquan serves to lighten the mood and bring movement to the storyline. Perkins’s delivery is impeccable, as he breaks the tension caused by complex emotions. Lighthearted and likeable, Perkins has created a character that is not only relatable, but in many ways admirable. Watching him portray Anquan feels like meeting someone that you already know. Perhaps that is why the character comes across so funny.

To complement the efforts of this well trained cast, the technical features of this production can also be described as above average. The set itself is an eloquent example of modern day architecture combined with functional simplicity. There are no moving pieces, no flying elements or scattered levels. Rather, the set walls are composed of classic, suburban white siding and window frames with simple molding. The walls themselves are hung from the ceiling to give a floating effect. A back wall with windowpanes lets in improvised natural light, so the feeling of the interior set is one that is bright, welcoming and above all, thought-provoking.

"The Many Mistresses of Martin Luther King" is playing now through April 29 at the Atwater Village Theatre, 3269 Casitas Ave, Los Angeles. Tickets are $15-25, with pay-what-you-can nights also available. Purchase tickets online here, or by calling (323) 644-1929.