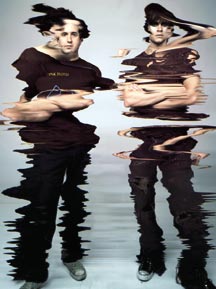 We live in a generation where pop bashing is a self-righteous sport. We roll our eyes when we see MTV’s 2nd generation of pop princesses and formulated boy bands, mock their attempts at stardom and overly discredit them. And though it’s usually the ones most concerned about the state of pop culture who’ll conjure up enough breath to mutter an annoyed "oh, gawd" at these teen idols, only the most elitist of pop snobs will actually do something about it. In this case, it’s avant-garde warriors Warren Fischer and Casey Spooner who have pledged to shake up the pop world by not only mocking it, but mocking it to ridiculous extremes with their highly-contrived and dutifully tongue-in-cheek performance art/electro-pop troupe, Fischerspooner.

Much to Fischer and Spooner’s disappointment, the New York music scene was uncharacteristically lifeless in its pre-millennial phase. Spooner, whose background is in visual arts and experimental theatre, collaborated with former art school classmate Fischer, a film and music veteran, to "emerge from nothing" (to borrow a quote from "Emerge," the tech-pop dance single from their debut album, #1) and stir up some action and confusion. They started in 1998 with a lo-fi one-song performance debut at a New York’s East Village Starbucks, where Spooner struck audacious poses while his partner did nothing more than push the ‘play’ button on the CD player——a classic moment that both minimalists and "Jackass" fans could appreciate. After that, Fischer, the team’s musical brainpower, began experimenting with electronic music, and Spooner, their voice and persona, worked out the performance aspect of the project. Fischerspooner is now a full-fledged production team consisting of twenty-plus back up singers, dancers, choreographers, set designers, stylists and costumers, and pride themselves with punk fervor as being a totally self-reflexive "portrait of entertainment."

By 2001, the Fischerspooner cast spurred a huge buzz in the avant-garde world after a series of over-the-top, Siegfried-and-Roy-on-acid performances at various art galleries. They are the inspiration of Larry Tee’s Electroclash Festival, and are deemed the s vanguards of the trashy ‘80s/Numan/Warhol-influenced movement, though Spooner claims that the ‘80s never existed and that Fischerspooner is not a regurgitation of the past but very much the post-Napster generation of today, built upon every aspect of technology possible. Rumoring to cost up to $25,000, their shows are a multimedia extravaganza involving pyrotechnics, laser lights, Technicolor make up, Victorian wigs, decadent retro costumes, wind/snow machines, fake blood, glitter, confetti, a whole lot of pretentious lip-syncing and no live music whatsoever. "We’ve definitely always fluffed up the cost of the show because we love creating this absurd fantasy," reveals Spooner. "I think it’s best when we pretend to be something more than we actually think that we are something. But it gets confusing the more real it becomes because there’s this funny distance between pretending and becoming."

Pop stardom is becoming more of a reality as the high-tech glam collective successively takes over the world, continent by continent—— first Berlin, the UK, then the rest of Europe and now the U.S. And though Spooner knows how tempting it is to fall into the mindtrap of a conventional pop celebrity, the New Wave demigod keeps it genuinely fake. "I don’t think we’re doing anything that other entertainers aren’t already doing. We’re just showing it a different way and slapping people in the face saying ‘wake up!’" he explains. "But some of them want to be complicit in the pop illusion."

To have wildly fabricated illusionists snap the pop world out of its delusional state and into another extravagant fantasy may be too conceptual for the average pop consumer. But deconstructing the superficiality of pop culture by melodramatically fetishizing its violently hyped glamour without getting wrapped up in issues of integrity is refreshing, revolutionary and by all means worth a shot. Fischerspooner has nothing to lose and is as good as a mindfuck can get.