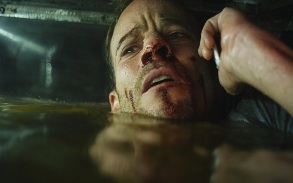 After the box office failure that was Buried, do audiences really need another movie about a man trapped in a coffin trying to get out? After seeing Brake, the answer is yes. Heart-pounding and pulse-racing from the start, director Gabe Torres’s film mixes all the right ingredients.

United States Secret Service Agent Jeremy Reins (Stephen Dorff) wakes to find himself disoriented and cramped in a small space. He only has a fluorescent red light with a timer counting down the minutes and seconds, an old CB radio, and a man’s voice on the other end. As the film begins to unfold, we learn that Jeremy is a small part of a larger plot, but he holds the key. He is simply a pawn in a terrifying conspiracy.

This film takes the viewer on a ride, both literally and figuratively. It never stops moving, as we follow along with Jeremy, who is encased in a plastic box in the trunk of a car. As the scenario unfolds for the audience, it unfolds for Jeremy as well. The story develops every time he finds out threads of information, and lets you into the larger story little by little.

There are very few characters in the film, and Dorff, who takes up most of the screen time manages to keep you engaged. Even though we don’t see other people, their voices are crucial players that help amp up the drama.

Brake keys the audience in with the bedlam of chaos happening outside of the car, and makes you sense it even though you don’t see anything.

Knowing that this film was shot in only 11 days, kudos to the director for delivering a thumping, action-packed film. Along with Dorff’s stellar performance, the musical score also helps to create a really uncomfortable feeling that intensifies the mood. With all the twists and turns, Brake definitely keeps you on your toes.