Cameron Diaz: Gets Serious with In Her Shoes 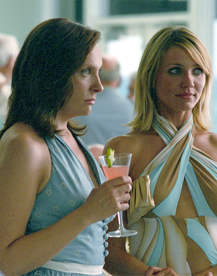 With the exception of a few films, Cameron Diaz has made a name for herself by being the funny, tall, beautiful actress known for stealing scenes with her comedic timing and physical assets. Never afraid to belt out an off-key tune for a few laughs, Diaz is also never shy about shaking her butt for the cameras if it means box office dollars. However, as anyone who follows her personal life knows, Cameron Diaz means business and she’s not just some ditzy blonde the paparazzi can push around.

Audiences will get to see the more serious side of Cameron Diaz in her new film, In Her Shoes. Directed by Academy Award-winner Curtis Hanson (L.A. Confidential, 8 Mile) and based on the best-selling novel by Jennifer Weiner, the film focuses on two sisters with little in common except size 8 1/2 feet. When Maggie (Diaz), the irresponsible and sometimes-employed party girl, moves in with her attorney sister Rose (Toni Collette), the two immediately clash. Rose eventually boots Maggie out, and with nowhere to go Maggie seeks out the grandmother (Shirley MacLaine) she didn’t know she had. It is only after Maggie moves into her grandmother’s retirement home, where her grandmother’s neighbors immediately label her as a gold-digger, that the two sisters discover a true appreciation for one another – aided along the way by the legacy of their mysterious mother and the grandmother they never knew existed.

Despite trailers showing Diaz’s bikini-clad character drawing attention amongst the retirees poolside, In Her Shoes showcases Diaz as the talented actress she is rather than the long-legged beauty she’s become known for. After a string of comedies that simply showcased the 33-year-old parading around in her underwear, audiences have almost forgotten about her ball-busting role in Any Given Sunday or even her psychotic performance in Very Bad Things. Diaz shines brightest in the few dramatic or dark comedies she’s starred in, and the heart-rending In Her Shoes should remind audiences that she’s not just big screen eye candy – she’s worth every penny of that $20 million check she received for Charlie’s Angels: Full Throttle.

"Cameron’s portrayal of Maggie is truly magical," says director Hanson. "She brings to the role a great understanding of how attractiveness can be an asset in our society. She also knows how appearances can be a mask. The wonderful thing about her performance is the way in which she illuminates Maggie’s fears, insecurity and vulnerability. So even when Maggie’s doing horrible, unspeakable things – things you would never do to a sister – Cameron makes us believe there is a goodness inside her. You can see that Maggie is yearning to be taken for more than just a pretty face or the girl with the great body. You feel for Maggie because you realize how badly she wants to make a life for herself, and you understand how her lack of self-confidence makes that so hard."

While at first glance the role of Maggie might not seem that deep or challenging – when audiences are first introduced to the character it’s during her 10-year high school reunion, where a very drunk Maggie is screwing one of her former classmates in a bathroom stall – the character’s sexuality plays an important part in Diaz’s performance. Audiences get to see that life isn’t easy simply because one is beautiful, a lesson Diaz knows all too well with the paparazzi constantly following her every move.

"I’m in at least five magazines a week, and there are at least five stories going on," Diaz recently told GQ’s Marshall Sella when asked about her and boyfriend Justin Timberlake’s experience with the tabloids. "I’m getting married or breaking up; Justin and I are moving in together; or I want to get married. None of it’s true. Not any of it! People are so obsessed with it all. The idea that people are together just to get married and have children – not every relationship ends up that way."

In Her Shoes helps illustrate the point that looks don’t necessarily equal "happily ever after" by juxtaposing Diaz’s character with Toni Collette’s Rose. Although at first Rose struggles with her weight issues and living in the shadow of her beautiful sister, the Princeton educated attorney eventually finds happiness and true love while Maggie struggles just to find a place to call home. At one point during the film, Diaz’s character comes to the realization that she is acting like a whore, and asks her latest one-night-stand for the usual asking price of $200 to help her get back on her feet. Of course, Maggie’s behavior stems from a secret she’s been hiding since she was a child, which is the main reason she can’t keep a steady job and instead has to rely on her looks to get through life.

"Maggie is like a child," Diaz states. "She seems tough and outgoing, but she’s really very lonely, selfish and self-centered. To make her way through life, she can only use sexuality, looks and charisma. Eventually, she realizes these things are running dry, and that she must adopt a different way of living by relating to the people who love her. But she has always seen herself as a victim. She never takes responsibility for her actions, so she doesn’t really understand how she has arrived at such a bad place. When Rose throws her out, she truly has no friends to rely on, no place to go. She is desperate and terrified, and everything she does stems from that fear."

As audiences eventually find out, Maggie’s personality is also heavily influenced by her mother, a woman whose mental problems eventually led to her taking her own life. It is only after Maggie and Rose visit their long-lost grandmother that Maggie discovers the truth about how her mom died, and the two sisters realize that despite their differences, without each other, they’d truly be incomplete.

Regardless of how Diaz’s emotional performance is received among critical circles, after a 2-year absence from the big screen (Shrek 2 excluded, since Diaz just provided vocals for the film), the actress’s silver screen return will please fans whenIn Her Shoes steps into theaters.

In Her Shoes releases in theaters Oct. 7.