Into the Blue: Jessica Alba and Paul Walker Hunt for Booty in New Underwater Adventure Flick Into the Blue 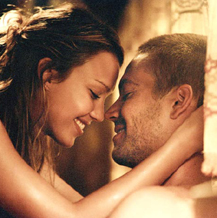 Untitled Document At a time when most of the country is reeling from the traumatic effects of the various hurricanes that have befallen upon our great nation in recent weeks and months, it’s nice to sit down and watch a film centering around the upside of these chaotic storm systems. What I learned watching Into the Blue is that hurricanes can do good – they can help you find treasure, and lots of it!

The film opens with an intense, stomach-turning series of scenes depicting a plane going down in the midst of such a hurricane in the Bahamas. This is bad, granted, but soon thereafter we learn that the same storm that knocked this aircraft from the sky also swept aside enough underwater sediment to uncover a whole new world of booty (the pirate kind). Also, strangely, it didn’t seem to do much damage to the gorgeous, ocean-adjacent burg from which skilled divers Jared (a well-tanned Paul Walker) and Sam (a scrumptious Jessica Alba) plot their search for riches beneath the sea. But adapting to this extensive time in the sea, surrounded by sea creatures and sunken chests, was not too difficult for our two dazzling protagonists.

"I’m very comfortable being around 30, 40 sharks," says Walker, who has gotten to the point where he can free-dive for almost three minutes. "As long as it’s in close proximity to the bottom."

While picking his leading lady, Walker was hooked by a certain person right away.

"I wanted someone that had attitude, a bit of an edge to her," the actor intones, describing Alba. "She’s tough, she’s beautiful, and I felt this capable sense to her."

Alba also took to the role like, uh, a fish to water.

"I’m really comfortable in the water," says the smiling brunette who honed her ocean-based acting chops in Flipper. "I’ve been swimming since before I could even walk."

"I would just push them away before they got too close," she says dryly.

There was one brush with disaster for Alba, though, caused by a less-than-perceptive costume designer.

"A costume designer put her in a silver wetsuit that looked just like a fish," says director John Stockwell.

While that quite dangerous yet quite stunning look wasn’t a highlight, it was actually the time out of water for Alba that really bit.

"I was wrapped up in a towel, calling my mom, hating my life," she explains.

When Jared’s lawyer brother Bryce (played by a smarmy, scene-stealing Scott Caan) and his most recent floozy, Amanda (Ashley Scott), show up down in the Bahamas, the treasure-hunting crew is complete. The foursome get along very well despite a bit of animus between goody two-shoes Sam and the more daring Amanda. The chemistry between Walker and Caan, though, is very brother-like, owing to their longtime friendship and stint as roommates.

"We’re like brothers," says a grinning Walker. "We love and hate each other like the characters in the film, we wrestle."

Caan got along less well with his other co-stars, the spiky-toothed denizens of the deep. While Alba and Walker adapted to life underwater, Caan was a little less enthusiastic.

"As soon as most of our actors got down there and got bitten, they all got over it," says Stockwell. "Besides Caan, who never got over it."

Ashley Scott was also a bit freaked out by the bite-y little fellows. "I was whimpering, petrified, scared to death," she admits.

But getting into the water with sharks wasn’t the only thing she had to prepare for. There was also the issue of spending 99 percent of a movie in a skimpy bathing suit. And how did she deal with getting in shape for this role?

"A lot of vomiting," she laughs.

Light-hearted fun, not vomiting, is what moviegoers will discover when they dive into this glossy, sun-kissed flick. Not enough pirate jokes for my taste, but that’s just me.

Into the Blue is currently in theaters.