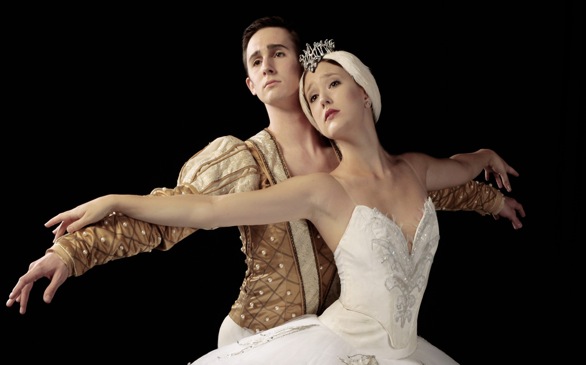 The Los Angeles Ballet’s “Swan Lake,” like Pyotr Tchaikovsky’s accompanying score, is hauntingly beautiful. The ballet starts at the birthday party of Prince Siegfried, as played by Kenta Shimizu. He is told he must choose a wife. Instead, he leaves for the forest.

At his birthday party, there are many performances in his honor. Christopher McDaniel’s performance as the Jester is spot on. He mixes just the right amount of comedy and grace into his performance.

After Prince Siegfried enters the forest, he sees a lake filled with swans. He dances with the Swan Queen and learns that she is the princess Odette, who has been cursed by the sorcerer von Rothbart to live as a swan during the day, and at night becomes a woman.

The dancing during the prince’s birthday party was fun and festive. The dancing of the swans in the lake was much more graceful and had an effortless elegance.

Alynne Noelle danced with beauty and grace as Odette, but it is not until Act III that Noelle is truly able to shine as Odile. Odile is von Rothbart’s daughter that he has disguised to appear as Odette.

As Odile, the darker edge Noelle takes on oozes confidence. Noelle uses both her eyes and dancing to lure the prince in until he professes his love for her.

Despite the beautiful dancing of Odile, the prince realizes she is not Odette, who he has fallen in love with. He returns to the lake and apologizes to Odette. She forgives him and they dance. Their love kills von Rothbart, but does not destroy his curse, and Odette remains a swan.

Noelle makes it easy for the audience to understand why Prince Siegfried falls for her. Shimizu as the prince, however, is not nearly as enjoyable to watch as Noelle, or many of the other dancers.

While there is no question that he is a great dancer, the moments where he was on stage and not dancing, of which there were many, lacked charisma. He has great technical ability, but lacked the stage presence of the other leads.

Shimizu had the most stage time of anyone, but did not make the most out of it. If he were to raise his chest when he walked or showed more emotion in his face when he was not dancing, it might have been easier to accept that he was a prince.

The set was incredible, especially in the third act. The size of the stage and the details of the set design made the viewer feel as if they were truly inside a castle. The fog and simplicity of the lake gave it an eerie quality, perfect to accompany the dancing.

The music and the dancing were both beautiful, but the ballet did feel a bit long. Each of the four acts was about 30 minutes, with an intermission between each act, making the entire show a little over three hours.

The performance transported the audience into a magical world of swans, princes and sorcerers, and overall was a true joy to watch.