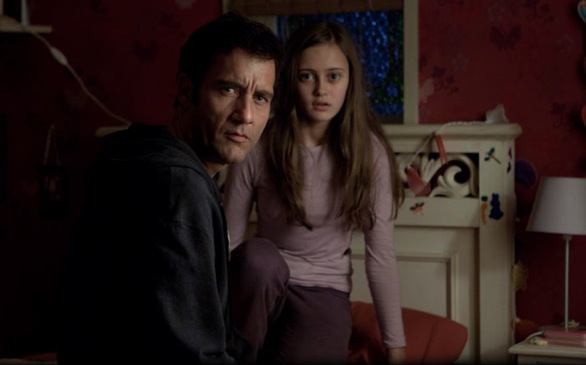 The horror film genre has been on a steep decline over the last couple of years, after the Saw series came to an end. Intruders started off like a supernatural horror classic in the making, with superstar actor Clive Owen (Derailed) teaming up with visionary director Juan Carlos Fresnadillo (28 Weeks Later). The pair seemed like a combination that could not lose; however, it didn’t take long to come to the realization that just because something works on paper, it doesn’t mean it will work on screen.

Intruders tells the story of two children living in different countries, each visited nightly by a faceless being who wants to take possession of them. Fresnadillo plays on fears and experiences that we have all had growing up: the monster in the closet and the beast under the bed. In this movie, the familiar childhood fear has taken a form known as Hollow Face. The problem is that Hollow Face isn’t very scary. He is, in essence, air dressed in sweatpants and a hoodie (thus the name Hollow Face).

While ultimately a letdown, the film begins with great potential. Intruders starts off with a bang, with a unique opening rain scene that introduces us to the movie’s villain. Though no one can see him, Hollow Face lurks in the corners, desperately wanting to belong and be loved, but only knowing how to spread fear and hate.

He enters into the life of John Farrow (Clive Owen) after Farrow’s teenaged daughter, Mia (Ella Purnell), mentions the name Hollow Face. Mia is soon assaulted in their home, and the line between fantasy and reality begins to blur. It seems that no security measure can keep Hollow Face out of the Farrow home. John will do anything to protect his family, even if it means sacrificing this family to keep out all forms of evil. However, he soon discovers he is powerless to Hollow Face’s will.

What Intruders lacks is a genuinely frightening villain. Hollow Face goes from the faceless frightening character that has you on the edge of your seat, into a joke. Every time Hollow Face appears, you can’t help but to feel a sense of humor in the underdone horror character.

The performances from Owen and the older members of the cast were adequate, but it was the children of the film who were more entertaining; the film should have completely revolved around them.

Another issue with the movie is that the narrative gives away way too many clues by its mid-point, leaving little surprise for the end.

It was a shame Intruders was poorly executed because the story on its own was very compelling. It started off strong, but the finale should have been more dynamic with a bigger impact.