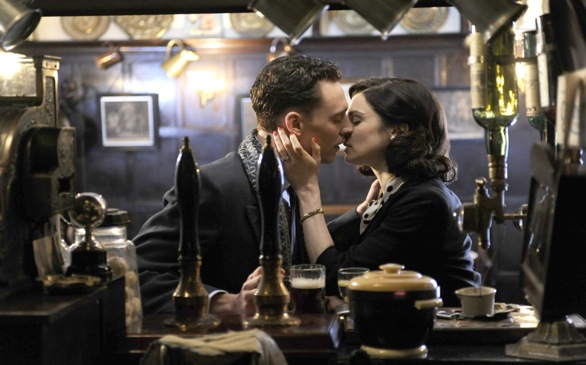 For those of you expecting greatness from this film, please reserve your excitement until after you’ve seen it. What looks to be a sweeping, heartbreaking love story in the trailer is simply a film about an affair gone wrong and the depression that follows.

The Deep Blue Sea, starring Oscar-winning actress Rachel Weisz, is a film about the wife of a judge who becomes involved in an affair with another man. The film opens with Hester (Weisz) narrating her own suicide note. After the opening credits, she turns on the gas in the fireplace and lays down in front of it, ready to die. But she doesn’t. Instead, Hester recalls her husband, and the beginning of the affair that lead up to her decision to end her life.

Before Hester is able to die, she is found by several friends in her building, one of which is skilled in the medical field. He is able to get Hester back on her feet. She begs that no one mentions the event to her lover, Freddie, who she is living with. Throughout the rest of the film, we are shown various flashbacks - Hester with her husband at his mother’s house, her husband finding out about her affair, and various moments with her new lover, Freddie - that flesh out the backstory of the film.

In the present, we learn that Hester’s reason for attempting suicide was that Freddie had forgotten her birthday the night before. All is well and good after he realizes his mistake and apologizes. That is, until Freddie finds the suicide note that Hester had written for him.

The film’s director, Terence Davies, truly made the correct decision when he cast Rachel Weisz as Hester. Weisz is brilliant, and she absolutely nails every scene. It is quite remarkable and rare to see acting of this caliber at all, and that alone should be enough convincing to see the film. Unfortunately, the same cannot be said for the story. It is interesting, yes, but is it enough to carry an entire film? Granted, the film is short (98 minutes), but it still feels as though the bickering and fighting between the characters runs a little long. It seems almost as though there should have been a larger overall story than just the affair.

In the end, if you can look past the lack of a proper plot, you’ll be in for a treat. Not only is the acting superb, the cinematography is also something to be celebrated. You may find yourself slightly bored at some points, but the good in this film far outweighs the bad.

The Deep Blue Sea is in theaters now.