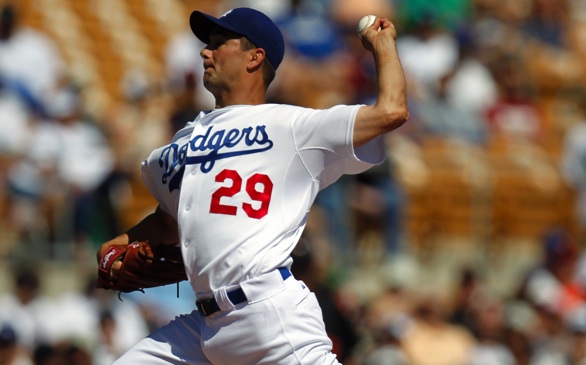 When the Dodgers take the field on Thursday, April 5 to begin the 127th season of Major League Baseball, the big story will likely be the new owners and what they plan to do with the team. Outgoing owner Frank McCourt has indicated that by that date he would notify the public of who will be the new owners. The selling price of the team is anticipated to be the highest in history for a North American sports organization at well over a billion dollars. But for all the talk and speculation about what this will mean for the ballclub, the most spectacular fact will be the playing of the game itself.

I had this realization last weekend sitting in an unusually crowded game at Camelback Ranch, the spring training field for the Dodgers. They were playing the San Francisco Giants, and during the third inning, utility outfielder Tony Gwynn Jr. made an impossible diving catch down the left field line. For a moment, his body was stretched horizontally above the ground, and gasps of awe filled the park. This game is high art, as graceful as a ballet and as heart-wrenching as the opera.

One of the finer delights of spring training is that it hardly matters which team wins or loses, and yet the play of the game is imbued with real passion. Every at-bat, pitch and fielded ball means something to a hungry ball-player looking to win a spot on the big league roster.

As for the Dodger roster, it appears to look a lot like it did at the close of last season. A few new faces include middle infielders Mark Ellis and Adam Kennedy, who will be vying for starting spots with Dee Gordon, Ivan DeJesus and Justin Sellers. A couple of new starting pitchers were acquired over the off-season, including lefty Chris Capuano and Aaron Harang. None of them are what you might call A-listers.

The players of great expectations are the stars of previous years: outfielders Matt Kemp and Andre Ethier, and 2011 Cy Young Award winner Clayton Kershaw. Still, overall it is hard to get overly excited about the chances of this team running away with any titles. If anything, what the Dodgers have in their favor is a relatively weak National League West division. But winning isn’t everything, right? That’s what spring training reminds us.

Soon to be ex-owner Frank McCourt will not likely be remembered with great fondness by most Dodger fans, with so much off-field drama and mismanagement of team finances. But to give the devil his fair due, McCourt did put into works the building of a first-rate spring training facility in Camelback Ranch in Glendale, Arizona. This being the fourth year the Dodgers play in Arizona, word has finally gotten out about its many charms. Testament to this fact is the growing number of fans who are driving out from L.A. to catch games.

Nearly 14,000 fans, a Cactus League record, came out to see the Dodgers play the Giants on March 23. While the game ended in a 3-3 tie (most spring training games don’t go extra innings), the fans were treated to some great baseball. Dodger icon Don Newcombe threw out the first pitch, and Vin Scully was in town to do the play-by-play. The old Dodger-Giant rivalry could be felt, and fans of opposing sides cheered heartily. And yet the usual vitriol between Dodger and Giant fans was missing. Every fan seemed bonded in celebration that baseball season is back. This in a nutshell is the joy of spring training, and the reason why every year there are more fans making the pilgrimage to Arizona.

And it’s not to too late for you to make this pilgrimage. The final spring training game at Camelback Ranch is April 1. Located about a 30 minute drive from Glendale’s downtown, the field sits between open desert land and a stretch of bland colored track-housing. The nearest hotels are located around the monstrous Westgate Mall, which features an orgy of billboards and lights in the style of The Grove shopping complex in L.A. It is all things gaudy and spectacular. All the new hotels can be found here, including the Renaissance, with a polished interior and fancy pool and spa. It is the classiest of the bunch, and well-worth the splurge.

In contrast to the razzle-dazzle of the Westgate Mall is the quaint old downtown of Glendale, about 15 minutes away from the mall. The city founded at the turn of the last century retains a small town feel with its antique shops and mom-n-pop restaurants. Here you can get a good night’s rest at the Gaslight Inn, the town’s oldest hotel, which features a lobby with ornately decorated high ceilings, where they serve up a delicious morning buffet.  Sitting in the lobby, you feel as though it could be 1920 and you’re some traveling salesman. But on this trip you don’t have to sell anything. Your only job is to watch baseball and love life.