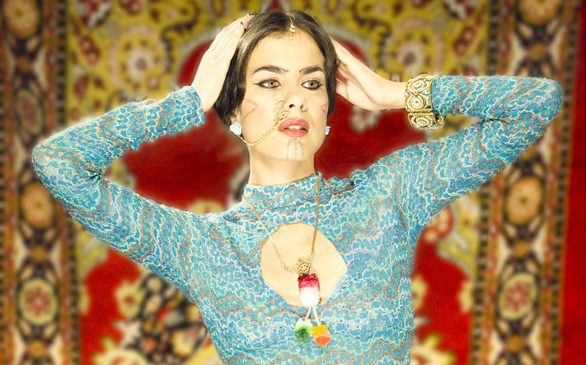 Celine Reymond is the lead singer of Kali Mutsa.

Kali Mutsa's music is fresh and rather original. The debut E.P., titled Ambrolina, is truly unique and has an alternative essence.

"We focus on electro-gypsy," Celine Reymond, the group's lead singer, proudly explains. "We mix what we like, especially our cultural background from the north of Chile."

"Tunupa" is the group's first single off the album. It starts off in a way that can only be described as haunting, but it soon develops into a joyful track, ending with a  thrilling segment of pure cumbia that is quite pleasing.

Reymond gets inspiration for her music from universal mythologies, religions, and surrealism, among other things. The beautiful South American, who is also an actress, also goes by the name Kali Mutsa - her alter-ego.

Throughout the E.P., we come to experience the innovative ways of Kali Mutsa. "Jauja" is another melody illustrating the band's originality, but it also shows their ability to produce a solid tune.

Kali Mutsa utilizes numerous musical instruments, including a Balkan brass, an occasional Indian veena, an organ and a drum kit. Their instrumental versatility sets the stage for their soon-to-be-popular repertoire.

But what makes the band shine most is the charisma behind Reymond, who loves to paint in her spare time, within her sexy and playful vocals, and her seductive physicality as well.

"I like to be possessed during our performances," she confesses. "But that depends on the environment we are in and what vibe we get from the crowd."