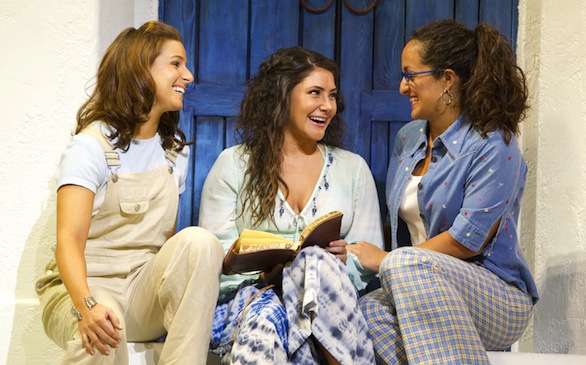 The smash hit musical "Mamma Mia" is now playing at the Pantages Theatre in Hollywood for an exclusive two-week run.

Based on the infectious music of the Swedish pop group ABBA, Kaye Tuckerman leads the 30-member cast as single mother Donna Sheridan. The story begins with her daughter, a bride-to-be, Sophie (an energetic Chloe Tucker) sending wedding invitations to three men she has never met --according to her mother's journal, one of them is her father.

Sam Carmichael (Christian Wheelan), Bill Austin (John-Michael Zuerlein) and Harry Bright (Paul DeBoy) soon arrive at the wedding's location off the Greek mainland. These three actors, along with the rest of the cast, give above-par performances. While the acting is strong, what makes "Mamma Mia" truly shine is everyone's singing, which is superb.

In the show, Tuckerman is fiery and delivers a knock-out punch with her theatrics, portraying her role with equal parts drama and comedy (just like the play itself).

Meanwhile, Wheelan provides an edgy yet mature look at what sexy is all about; he brings "sexy back." Wheelan scores a big winner while singing "Knowing Me, Knowing You," as he delivers an impressive solo with near-perfect vocals.

In addition, Tucker's performance as Sophie is very noteworthy. Tucker, who is beyond adorable in her role, is a Los Angeles native with a very promising future ahead.

The musical has a great supporting cast as well, with Donna's two best friends Rosie (Mary Callanan) and Tanya (Alison Ewing) delivering amazing performances in their characters. In "Take A Chance On Me," Callanan shows off her strong voice and Broadway talents in fine fashion. She is very good at making the audience laugh; Callanan easily steals the show in her sporadic scenes. While Callanan provides the comic relief, Ewing keeps the audience intrigued with her sexiness and theatrical charisma. She, as well, gives an unforgettable performance.

The musical includes many of ABBA's greatest hits (though I found the lack of "Fernando" disappointing), such as "Chiquitita," "Dancing Queen," "Mamma Mia" and "S.O.S." The performance of these classic songs sparked smiles, loud cheers and standing ovations throughout the crowd. Perhaps the highlight of the show was the performance of "I Do, I Do, I Do, I Do, I Do," which was done quite beautifully.

Overall, "Mamma Mia" is both an honorable portrayal of ABBA's successful career and a fun story that is sure to keep audiences entertained.