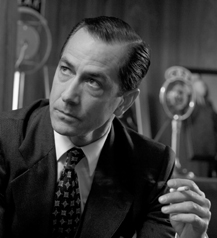 Untitled Document George Clooney is one of those rare contemporary actors who can easily morph into any role. Whether he’s playing an escaped convict trying to find his way home (O Brother, Where Art Thou?), a considerate robber (Out of Sight>) or a caped crusader (Batman & Robin), Clooney can do it all. His next role has him doing triple duty as actor, writer and director in Good Night, and Good Luck (Warner Independent).

Set in the 1950s, GNGL is a look back at the golden age of broadcast journalism in its infancy. At its helm was news legend Edward R. Murrow, played by David Strathairn, who brought news reporting to a high standard. Clooney plays Fred Friendly, the producer of Murrow’s radio show "I Can Hear it Now" and its television sequel "See It Now." The two powerhouses remained longtime friends until Murrow’s death in 1965. Clooney and his Section 8 producing partner Steven Soderbergh, along with others like Dallas Mavericks’ owner Mark Cuban, all had a hand in the actor-director’s long-awaited project.

As the son of an anchorman, Clooney was privy to the undisclosed world of journalism. Murrow, Clooney says, was a huge part of his growing up, calling him the high watermark for broadcast journalists. Instead of doing a biopic, Clooney and producer/co-writer Grant Heslov decided to focus specifically on the on-air debate between Murrow and Senator Joseph McCarthy. During his heyday, McCarthy was notorious for outing communists or people thought to be communists. This "witch hunt" lasted for many years until Murrow stepped up and exposed McCarthy for the tyrannical tormenter that he was.

"It is not easy being a democracy," offers Clooney. "It requires constant diligence and that diligence requires upon the state to be diligent, it requires also the understanding of the complexities. … The complexities are [that] it’s not often black and white. It isn’t, ‘oh, let’s set that guy free. If we can’t try him, let’s set him free.’"

To make sure the facts were accurate, Clooney did intensive research. He didn’t want his work to be a polarized piece. He double-sourced every detail in the film by having the actual people who were there with Murrow present during the film’s making. Joe and Shirley Wershba (played by Robert Downey Jr. and Patricia Clarkson) were on the set daily to confirm that events depicted in the film actually happened. Air Force lieutenant Milo Radulovich, who was discharged on the grounds that his father and sister were communist sympathizers, was also on hand during filming. Clooney went through piles of archive footage and read Fred Friendly’s memoir, Due to Circumstances Beyond Our Control, about the role of television in American society. He also re-read Murrow’s eloquent speeches he wrote and read on air, which always ended with the familiar tagline, "Good Night and Good Luck," thus inspiring the film’s title.

"I heard a lot of the [radio] shows," Clooney says. "I haven’t heard all of the television shows. But I started watching those speeches again and I thought they were incredibly inspiring. I missed that kind of clarity at times. I really enjoyed the idea of talking about Murrow again."

Archive footage of McCarthy during his infamous hearings is also used in the film. Clooney said he included the footage to give audio-visual proof of what McCarthy said. He may have also included it to keep Bill O’Reilly and other widely known anti-Clooney fans from claiming the film to be based outside of fact and just another Hollywood fable.

It would be easy to surmise that any film attached to Clooney’s name would easily be green-lit. Despite this plausible advantage, Clooney admits that GNGL was a hard sell.

"You’d think, at this point in my career, if I’m going to write it for a $1, direct it for $1, and act in it for scale in the second biggest part of the film, I could get $7 million bucks for it. It took us forever. We did it piece by piece by piece."

One reason for the extended production time might be that the 90-minute film was shot entirely in black and white.

"I only know Murrow and McCarthy in black and white. I’ve never seen them in color. I don’t know about them in color, so I think you have to film things the way you remember them."