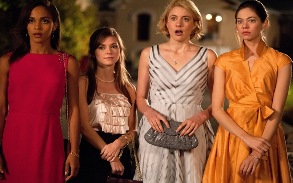 Soap: Could it be the cure for depression? According to Damsels In Distress, the answer is yes! The film, directed by Whit Stillman, deals with issues like love, sex, religion, stupidity, hypocrisy and good hygiene. It’s hilarious, dramatic and everything in between. There is even a musical number at the end! In short, it’s everything a night out to the movies should be.

Damsels In Distress centers on a group of girls attending college. Their mission: to end depression amongst their fellow students. Violet (Greta Gerwig), the leader of said group believes that good hygiene is the way to do this. But how will Violet react when she herself is thrown into the deepest depression? All of this happens as she is attempting to mentor her best friends, Heather (Carrie MacLemore) and Rose (Megalyn Echikunwoke), and a transfer student named Lily (Analeigh Tipton). Meanwhile, Lily meets a new man, Charlie (Adam Brody), who Rose labels as a “playboy operator.” Even more distressing for Violet, she finds herself becoming infatuated with Charlie, her friend’s love interest. Can she look past her own sadness and help others with their problems by way of soap and tap-dancing?

This film is an absolute treasure. Every cast member executes the dry humor of the script excellently. Not only that, the script is truly hilarious. It also offers some interesting looks at different mindsets. For instance, Violet thinks that there is nothing wrong with being a little hypocritical. She says that just because she is flawed, why should she be barred from pointing out the flaws of others? That is part of the reason that this film is so interesting. Each character is so well thought out. Their thought processes are obvious, and it’s refreshing to see a film where not every character is a cardboard cutout, just taking up space. There is a reason and purpose behind these characters and the decisions they make.

The musical number and subsequent dance lesson at the end of the movie are also quite refreshing and unexpected. The “Sambola,” which Violet created, will surely have people dancing their way out of the theater. The only real complaint that could be made is that the musical number takes the place of an actual ending. However, it’s really so pleasant that you may not even notice at the time. Overall, there isn’t really anything negative that can be said. Damsels In Distress was a joy to watch.