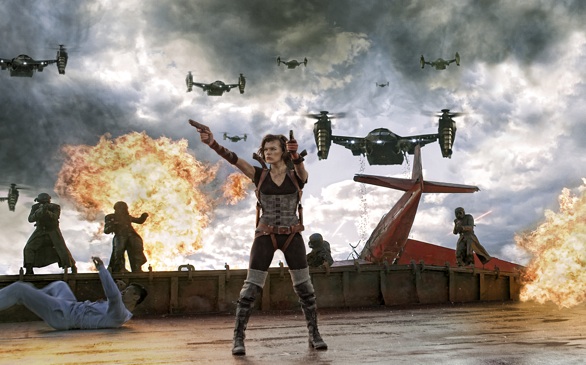 Campus Circle sat down with Milla Jovovich and director Paul Anderson of the upcoming Resident Evil: Retribution to find out what it was like working on the fifth movie in the ever-popular series.

Q: At what point in Afterlife did you begin working on Retribution?

Paul Anderson: When it was on DVD and Blu-Ray.
Milla Jovovich: That’s what I think is amazing about Paul and the way he works. We don’t have a movie coming out every year because we need to fill that slot. It could be every two years, it could be every three years, but it’s all about Paul’s imagination and what sparks it. There’s always this honesty and this organic quality about the way he writes and the way these movies come out. I think that’s what keeps it fresh.

Q: Has directing the Resident Evil films become more personal with each movie?

PA: It was [personal from] the first film. Milla came to make the movie because she played the game, and she loved the game. The same for me. Everyone is passionate about the subject matter. For me, I was passionate about re-energizing a genre that existed when I was a kid, but no one had seen an undead movie for 15 or 20 years. A great deal of passion and energy went into the first film, and that’s always continued. I think that’s one of the strengths of the franchise --that’s why the franchise continues to grow. It’s very [rare] for a movie series to have the same creative team behind and in front of the camera for entire growth of the franchise. It’s really in passionate hands.

Q: Have they almost become home movies for you guys?

MJ: Home movies? My goodness, I should hope not!
PA: Expensive home movies.
MJ: My god, if it took that long to make a home movie...  No, I think the most important element, what makes these movies wonderful, is the fact that the Resident Evil universe is amazing. When I started playing the games with my little brother, it was that feeling of, ‘I love this world!’ It’s really freaky, and as soon as the sun goes down, you get a little nervous, and it was always such a well-beloved, but not the most well-known game. I know Michelle [Rodriguez] and I were attracted to it because of that, as well, because it was the cool, underground game. Suddenly, it’s this little European action/horror flick. Everybody came into it, not asking for paychecks or dressing rooms...
PA: The first movie was like the little movie that could. When we made it, we shot it almost entirely in Berlin. While we were shooting, we didn’t even have any American distribution for the film. It was the kind of movie that nobody wanted, [or] maybe it was the movie nobody knew they wanted, but we were making it with such energy and passion. I think the movies have always had this cool attitude about them. I’m very proud of the fact that we’ve turned that into a billion dollar franchise.
MJ: The thing that’s wonderful is that when I was playing Resident Evil, it was still underground. Now, with the movies taking on a life of their own, it’s actually invited so many people that are non-gamers into the Resident Evil universe that are now gamers and love it. [That’s] great for us, too, because I feel like we’ve really helped the game become much more of a global game. It’s fun to introduce people to something that you have a passion for.

Q: Are there any choices you made as an actress that have become part of the Resident Evil games?

MJ: No, he [Paul] has more of that. They use his set pieces and things. I know they used the glass corridor and they used the desert that we did in number three. For some reason, they don’t want to put Alice in the game.
PA: Well there’s a character in the last game who’s dressed identically to how you are dressed in Afterlife. The costume is exactly the same.

Q: How closely do you work together when writing the scripts? Milla, do you have any input on the scripts and on the fate of your character?

MJ: He’s the man that writes the scripts.  I’m just the person that reads them.