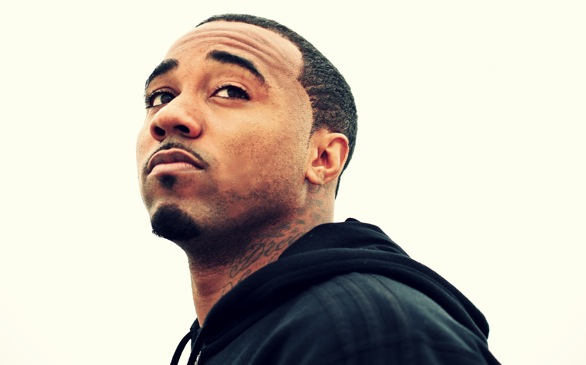 Problem, born Jason Martin, has been spotlighted by hip-hop royalty such as Snoop Dogg, Talib Kweli, Lil Wayne and Jay-Z’s longtime engineer, Young Guru, among many others. Coming up as one of the West Coast’s freshest new artists, the multi-talented emcee is ready to take on the world with his first full-length digital L.P., Plan B.

Ironically, music wasn’t Problem’s first career choice –what he dreamed of being is a successful NBA player. Things took a turn in high school when he tried to impress girls, and found that his rapping was getting him more than the attention he was looking for.

“I didn’t really find my way into music; it was more like it found me,” says the rapper. “But once I started, it took complete control of my life. I also got lucky and I bumped into the right people,” admits the L.A.-based artist.

Meeting the right people and taking advantage of the opportunities that arise is something that comes naturally for the Compton-raised artist. Even after working with a roster of elite artists, Problem is still in awe of how far he’s come, and recounts his meetings with people like Snoop Dogg with vigor.

“A friend invited me to the studio where he was producing something for Snoop. I wrote a song and when Snoop asked who wrote it they all pointed at me. He liked it so they let me come around a little bit more. I wrote another one, and he went crazy for it. Then he got me on staff,” recalls the emcee. “I’ve been writing on his last three albums. I feel blessed to be a part of that.”

Recently, the rapper known for his relentless work ethic and his ability to create rhymes at the drop of a hat, hit Austin, Texas’ SXSW Music Conference. There, he performed at the Kiss & Fly showcase on March 17, sponsored by Vibe Magazine. Also known as the “Respect the West” showcase, Problem performed along with label mate Bad Lucc and L.A. natives Glasses Malone, Overdoz, Nipsey Hussle, Skeme and Strong Arm Steady. Not knowing what to expect, the rapper went in ready for the taking and returned newly inspired.

“Just picture a mile long street full of shows one right next to the other, one big block party compiled of lots of little parties. There are all these artists just roaming around listening to different music: rap, rock, world music artists. It’s very random,” says Problem. “There’s so much to take in.”

A major score at SXSW for the West Coast artist was meeting Jay-Z’s long time engineer, Young Guru. While everyone was away from the studio, Problem began playing his music. Young Guru walked in while his track was playing and was impressed with the 28-year-old’s talent.

“I was playing my tune and then he [Guru] walked in and said, ‘Yo who is this? It’s nice!’” he recounts with enthusiasm. “I said it was me and he gave me all these props! This is the same dude that listens to Jay-Z rap all day. That fucked me, I was like what?! I couldn’t believe it, I was trippin’!”

He also spoke candidly about the first time he met rapper Talib Kweli, known for his complex raps and forward-thinking lyrics. Problem has much in common with the noted rapper; they both are prolific artists and transcend the classic realms of hip-hop.

“I was at the studio with a friend at the time I had a record out. I walked in and was like, ‘There’s Talib Kweli! I’m going to walk up to him.’ I said, ‘Hi I’m Jason,’ and he was like, ‘Yeah, I know who you are. Somebody at Warner Brothers was trying to find you!” he says with amazement. “That’s the shit! He talked specifically about some of my music and that blew me away.”

The young rapper, who has worked with the now notorious Chris Brown, also addressed the subject of Brown and Rihanna’s relationship. Problem simply states that the pair are just human, that s**t happens, and that he prefers not say whether Brown is right or wrong and let God be the only judge. As politically correct as he is, he couldn’t help himself from stating his feelings about the incident, especially as a father to a young daughter.

“I definitely don’t want anybody hitting my daughter in any way, shape or form! I teach my daughter not to fight with a boy. You come get dad, and then I’ll take care of it,” he adds chuckling, but in a very matter-of-fact tone.

Problem’s new album, Plan B, is compiled of original material that recalls every aspect of his life: the good, the bad, everything. Musically, it’s a very robust sounding fusion of everything you love about hip-hop. It’s been said he combines the song range of Ludacris, the style of Lil Wayne, and the West Coast claims of Snoop and The Game. Yeah, it’s kind of a big deal!

“Technically, we’ve been doing these types of projects for years, but this is considered the first because it’s like the first chapter to the book I’m trying to write,” he says metaphorically. “It has to come out good to keep people wanting to read.”

Problem drops mix-tapes like he changes his pants, and yet he can’t get enough. He’s a music-making machine. That’s impressive considering he walks into the studio day after day, not knowing what’s going to flow out. He randomly presses a key, or plays a beat and lets it roll.

“I can’t wait to get in the studio. I don’t know what I’m going to do when I get there, but that’s the dope part about it. I’m going to hear some beat that’s going to lead me to God knows what,” says the versatile lyricist.

Problem has made a name for himself penning songs for superstars, and he welcomes the hype and notoriety he’s currently receiving. He’s on the fast track to stardom, and is fearless as ever.  As a matter of fact, he’s ready for lots more and won’t stop until he achieves it.

“I can’t be scared of what I’ve been asking for, that’s crazy! That’s like me saying: I want a Ferrari, I want a Ferrari, and then it pulls up in front of my house and I say I’m not getting into that,” states the emcee. “No way! I’m gonna drive that motherfucker anywhere I can go.”