Lightning in a Bottle Set to Take SoCal by Storm Again 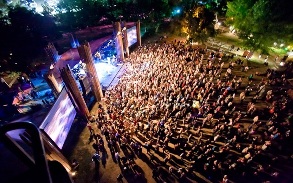 For those of you who will be suffering from festival withdrawal in the weeks following Coachella, the seventh edition of Lightning in a Bottle could serve as the perfect remedy to cure your ailment.

That’s because festival-goers and music enthusiasts can look forward to another impressive lineup of artists in Silverado, California, over Memorial Day weekend.

After featuring some of the industry’s hottest electronic acts a year ago with headlining performances from Pretty Lights and Thievery Corporation, The Do LaB made sure to turn the dial up another notch this spring.

Bassnectar and The Glitch Mob, who both first appeared at LIB in 2007, will headline the four-day festival, while Apparat, Bluetech, Tipper and performance troupe Lucent Dossier Experience also return to Oak Canyon Ranch.

It’s some of the first-timers, though, that could make this year’s event even more special.

Boulder-based duo Big Gigantic, String Cheese Incident side project EOTO and Slovenian producer Gramatik have each made their mark on the dance music scene, and are sure to captivate LIB attendees with a sonic formula that blends live instrumentation with programmed beats and samples.

Then there’s international pysbient sensation Shpongle, whose mind-twisting tendencies should coincide quite appropriately with the festival’s psychedelic vibe.

But music is only a part of LIB’s unique charm.

The festival has become a convention for yogis, artists and speakers to share their interests and ideas with other like-minded people — yoga classes, live paintings and workshops on sustainability can all be found on the itinerary.

“We’re proud to bring this community of musicians and friends back together again for its biggest, most realized vision of music, consciousness and sustainability efforts in the hills of Southern California,” Jesse Flemming, co-founder of The Do LaB, says.

That balance between music, art and philosophy is in part why tickets sold out last year, and with the right pieces in place for 2012, it could certainly happen again.

Lightning in a Bottle will take place May 24-28 in Silverado, CA. Tickets are $85-215 and are available for purchase online here.