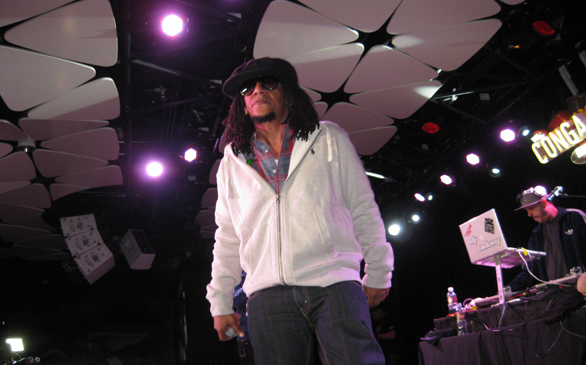 Humble as ever, Calderón came dressed in dark Levis, Nike shoes, a polo shirt and a hooded sweater, but also donned his signature in his long dreadlocks, dark shades and flat cap. Minutes after an energetic crowd called him out chanting, "Tego, Tego, Tego," the boricua sensation began his set and did not disappoint.

Calderón, who has been nominated for Latin Grammy awards, started his performance with an opening mix of "Latin Thug" and "Lean Back." That followed with a playful tune titled "No Quiere Novio (She Doesn't Want A Boyfriend)," which the audience loved, obvious by its positive reception.

While he certainly didn't shy away from performing his new material, the unique and unforgettable show also included Calderón's classics. "Guasa Guasa (Bullshit)" and "Los Mate (I Killed Them)" arrived unexpectedly towards the end. Calderón, who blends fusions of African, Colombian and Caribbean music in his eclectic repertoire, closed out the night with his most popular song, "Pa Que Se Lo Gozen (For You To Enjoy)." This is an upbeat track filled with notable lyrics, such as "Oye, si las más putas son las más finas (Listen, the sluttiest have more class)."

Not only a rapper, but a songwriter and actor as well, Calderón is arguably a pioneer of this Latin-urban style of music. His career began in 1998 when reggaeton was still classified as an underground genre, but it successfully flourished in the mid 2000s after his solo albums reached the top of the charts.