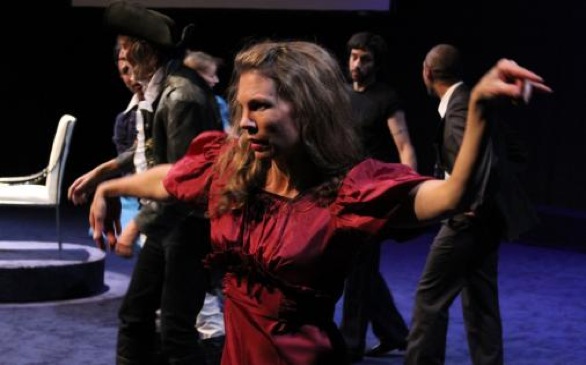 At some point in one’s life, you take a look at where you are and what’s going on in the world around you, and you reconsider the direction you're taking. It’s often called a “midlife crisis” for an older person, or a moment of truth for others.

For a country like the U.S., rocked to its core since 9/11, it’s been a decade of soul-searching for many citizens. One of those citizens is Seattle-based choreographer/director Dayna Hanson, who found that search to be the impetus of a new piece about what it is to be American called "Gloria’s Cause."

Hanson saw those around her leaving the country or questioning everything. She felt that at a time like this, “it’s important to hang on and hang in. There’s an important responsibility in being American, and filling it with personal integrity.”

"Gloria’s Cause" isn’t a period piece, although it does provide a healthy dose of American history, as it grows toward a contemporary understanding of what “America” means now. Comedic political text, performed with a live rock band, dancers and actors together atop a stage strewn with remnants of revolutionary garb and Hanson’s signature quirky gestures, combine for a show that references everything American from sports to '70s TV.

“Think of it as a scruffy quasi-period mash-up,” says Hanson.

Ironically, the creation of "Gloria’s Cause" paralleled the process of nation-building in a certain way. Shown last year as a “work in progress,” the production caused it’s own moment of pause for Hanson and her creative team. There were doubts from some  about the material and about the execution, but Hanson --with a "can-do" spirit and an extensive career as one of the country’s leading dance creators with her company 33 Fainting Spells (she’s a Guggenheim Fellow) --wasn’t ready to walk away. Instead, she faced her doubts, finding a new inspiration. She really believed “you can’t have faith if you don’t doubt it first. You can’t be courageous if you aren’t fearful. You have to go through the process.”

As Hanson reworked "Gloria's Cause," she had to redefine her own meaning of  the word “democracy.” The piece started off as an open collaboration, but eventually Hanson needed to pull back the reigns, create some rules and become the leader. And, as any good leader would, Hanson gathered her crew of nine people, gave them a well-honed script, and checked in throughout the process. Together, they wholeheartedly continued on their path to artistic revolution, and "Gloria's Cause" is the result.

Watch a trailer for "Gloria's Cause" here.