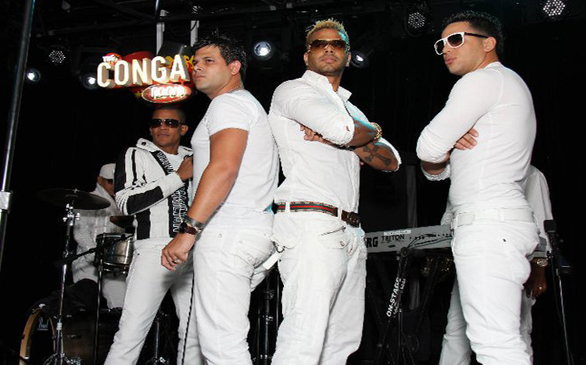 One of Latin America's most joyful music groups, La Charanga Habanera, is making its way to Los Angeles.

Led by music director David Calzado, the act is now internationally known, predominantly for its flare and fiery demeanor onstage since being founded in 1988. They will soon be bringing that fire to L.A. Live's The Conga Room in Downtown Los Angeles on April 5.

La Charanga Habanera, which consists of six members including Calzado, has excelled over the years with their blends of timba and salsa, and has been able to maintain their Cuban roots in their music. They are proud of it, and their (mainly female) fan base is as well.

This vivacious group is not only fast-paced in their delivery of their lyrics and sounds, but their dancing as well. When performing live or producing videos of their melodies, La Charanga Habanera showcases their bubbly persona to its audience. Such is the case with their song "La Mentirosa (The Liar)," a track that dazzles in every imaginable musical aspect.

With a peppy attitude, this sextet's versatile repertoire features several noteworthy tunes. "La Suerte (The Luck)" is an example of their expertise in tropical flavor, with its vigorous musical quality, originality and skillful creativity.

In 2003, La Charanga Habanera was nominated for a Latin Grammy for their album, Live in the USA, which they released in 2002. The group has 15 discs under its belt, with Acabaito de Nacer (Just Born) being the latest. Their countless hit tunes reflect the spirit of youngsters in the Caribbean island dominated by dictator Fidel Castro.

A mark of the high caliber of their music, La Charanga Habanera has shared the stage with such greats as Stevie Wonder, Donna Summer, Barry White, James Brown, Ray Charles, Frank Sinatra, Charles Aznavour, Jerry Lewis, Kool and the Gang and Whitney Houston, among many others.

To date, Calzado is considered to have played an essential part in the evolution of modern Cuban music. Thusly, the show figures to be an unforgettable night for those in attendance.

La Charanga Habanera will perform April 5 at The Conga Room in Los Angeles.