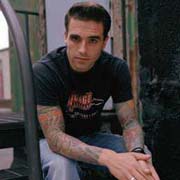 Modern day Romeo Chris Carrabba of Dashboard Confessional was at it again, getting fans weepy with his heartfelt songs that play out like love letters to the crowd. Carrabba sang oldies, such as "The Sharp Hint of New Tears," along with favorites, such as "Screaming Infidelities." As the likeable Carrabba seemed to beg, plead and yearn for love throughout most of his songs, the fans were right there with him, happily teary-eyed, singing along to each and every word. Dashboard finished with the popular "Hands Down" from A Mark, A Mission, A Brand, A Scar.

O.C. natives Thrice were also on hand delivering their screamo emo best, playing favorites off their most recent album, Artist in the Ambulance. Guitarist Teppei Teranishi blazed through his guitar strings during "Under A Killing Moon," and soon after, singer Dustin Kensrue gifted the fans with a heart-wrenching acoustic version of "Stare at the Sun."

Openers The Get Up Kids, the melodic pop-punk outfit from Kansas, sang a rousing set of tunes off their March release, Guilt Show.