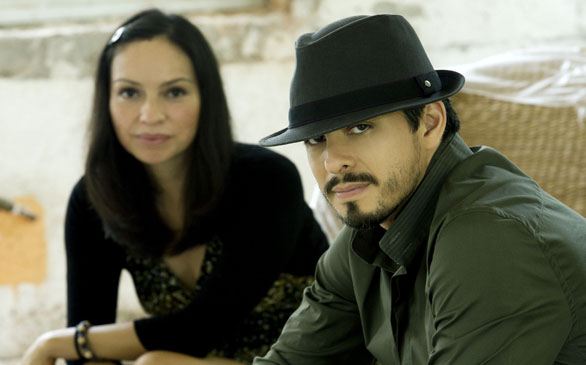 There is no denying that this innovative duo is beyond talented.

Hailing from Mexico, Rodrigo y Gabriela have been together for 15 years and counting. They met in Mexico City, and soon became part of a thrash metal band called Tierra Acida. After a stint with the group, this prolific duo embarked on a tour throughout Ireland that sparked the next phase of their career.

"After that, we played in the streets of Europe for two years," says Rodrigo. "Eventually, we came back to Ireland, and we got our management and a record deal."

Rodrigo y Gabriela's music does not include lyrics, but that hasn't detracted from their success. As a matter of fact, this is predominantly why they are so original and distinctive.

Their music derives from individual and collective inspiration and from personal experiences.

"It is kind of obvious to us when we feel like we have to start writing music," Rodrigo says. "It is because we went through something that has some inspiration for us to start working."

Known as Rod y Gab, they have released an E.P., three live albums and five studio recordings, including this year's Area 52, a re-recording of some of their most popular songs. It is a nine-track record, produced by Peter Asher and Rodrigo and featuring several Cuban musicians, that is a unique musical undertaking, featuring tropical tunes with an emphasis on the guitar. All the songs, which come from the duo's extensive catalogue, have been re-arranged, and were recorded in Havana accompanied by a 13-member Cuban orchestra known as C.U.B.A.

"The idea was just to get someone to do some arrangements as a background to old songs we had written," Rodrigo shares. "We really got a beautiful band in Havana. It was a lot of fun, and we all really did enjoy the project."

What makes Area 52 special, however, is its diversity of music. At times it blends jazz, salsa and rock with the fast-paced, rhythmic acoustic guitars the duo is known for, creating some truly great musical pieces.

"'Santo Domingo' is taken from the 11:11 album," Rodrigo explains. "In the middle, we added a piano solo that is not part of the original track."

The piece is just marvelous with its new arrangements, and is definitely a must-listen-to.

"Hanuman" and "Tamacun," which feature former Testament and White Zombie's John Tempesta on the drums, and "Ixtapa," which includes the contribution of Anoushka Shankar on sitar, are also stand-outs.

"To me, ['Ixtapa'] contains one of the highlights of the album because of Anoushka Shankar," Rodrigo says. "[She] has been my friend for a few years now, and we always talked about doing something together. I think it sounds really, really beautiful because of the sitar [mixed with] the Cuban background."

Rodrigo plays the lead guitar, specializing on finger-picking his instrument with dazzling speed. Gabriela, on the other hand, sports rapid, rhythmic methods in her playing. Both are truly vibrant on stage, and their passion for what they do is admirable.

The duo has taken their show all over the world, and regularly play shows right here in Los Angeles. In 2011, Rod y Gab presented their repertoire at the Hollywood Bowl; in 2010, they played at the Greek Theater. The year before that, the duo performed at the Orpheum Theatre. And now, this compelling musical act is set to arrive at the Hollywood Palladium.

"We are going back [to L.A.] to a different place," says Rodrigo. "[Our fans] should know that we always change things. [The tour will be] a lot of fun, and a different take at what we normally do. I really think they are going to like it. We are going to continue experimenting."