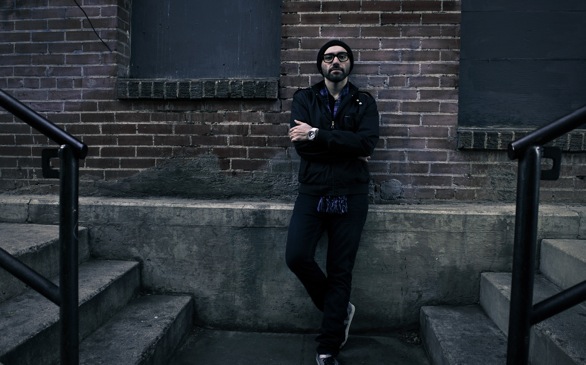 Talk to Alex Botwin about his journey through the music industry, and you can tell minutes into the conversation just how much he loves what he does for a living.

After all, not many people can get paid to follow their dreams.

Alex B., as he’s more commonly known in electronic music circles, is one of those lucky few. He’s had the privilege of traveling from city to city and sharing his work with fans appreciative of his talents.

Better yet, the Colorado-based producer has done it all by himself thanks to the success of his latest project, Paper Diamond, and his own record label/design firm/retail store, ELM & OAK.

There are no fights, compromises or breakups for Botwin to worry about nowadays. No record deals, signing bonuses or songwriting residuals to sort out with band mates. It’s just him and a studio, together as one.

“I can’t really control what I’m making,” he confesses. “I’m just enjoying the shit out of making music right now.”

That’s been Botwin’s vision ever since he picked up the violin at 4 years old. From that moment, his life has been dedicated to music.

Classically trained as a child, he eventually learned bass guitar and drums by the age of 13. He played in rock bands throughout high school and took advanced classes in music theory before pursuing a degree at Middle Tennessee State. There, he made it three and a half years before realizing that his dream wouldn’t come true in a classroom.

Having already formed The Pnuma Trio with keyboardist Ben Hazlegrove and drummer Lane Shaw while in college, Botwin was ready to take his music career to the next level. Influenced by the sonic barriers livetronica act Sound Tribe Sector 9 had burst through, the Memphis outfit adapted a similar style and built its reputation on playing over 200 shows a year.

Yet by 2010, the three band members found themselves going in different directions, leaving the door open for Botwin to develop his own brand of dance music.

Now, a little more than a year since the Paper Diamond project came to fruition, Botwin shares the spotlight with no one else.

“For a long time I cared about what other people thought [of my music],” he explains. “Now I just really don’t care.”

Most recently, his hit single, “Can We Go Up,” dominated the Hype Machine charts at No. 1, while his remix of The Weeknd’s “Same Old Song” received rave reviews from the blogosphere.

Botwin hasn’t had a whole lot of time to sleep, but you wouldn’t realize it hearing all the excitement in his voice.

“It’s been a crazy year,” he says. “But I feel musically freer now.”

Since releasing Paper Diamond’s debut album, Levitate, in early 2011, he has created over 150 tracks for his new, eight-song E.P. entitled Paragon. For Botwin, the lengthy recording process served as the impetus for the album’s name (paragon can be defined as “a model or pattern of excellence”).

“It’s not that I think my music is perfect by any means,” he admits. “These are the tracks that best represent where I am musically in my life and what I feel is my own sound. On this new record, I’m really doing something that’s unique.”

But Botwin is also gearing up for the debut of ELM & OAK’s Levitate Festival, featuring some of the biggest names in electronic music (Rusko, DJ Shadow, Paper Diamond and Pictureplane) for one night in Colorado.

If things all go according to plan, it could mark the start of something big for Botwin, who remains one of the only producers today to perform his shows with an iPad.

“There is so much in the works,” he says. “I’m just going to keep pushing forward.”

At this stage, that’s the only direction Botwin knows anymore.