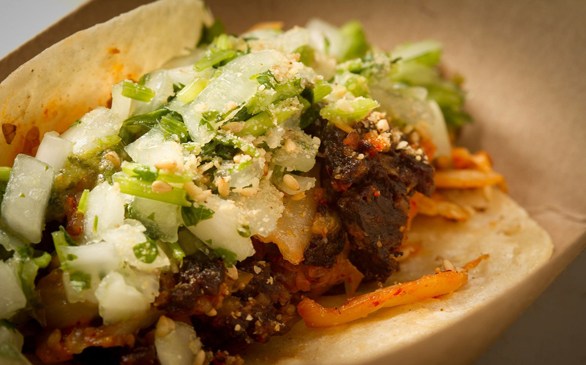 This is a love story about a girl and a truck. No, this isn’t the beginning of a sappy country song; it is a story about food. And this love story isn’t about just one girl; it’s about an entire city.

Roy Choi, founder of Kogi BBQ, metamorphosed L.A.’s food truck scene from blue-collar “roach coaches,” known for slinging greasy food at construction sites and fields, to gourmet food on wheels. Now, any manner of culinary creation you can fathom can be found on trucks all over L.A., but Kogi was the first one –as well as my first food truck experience.

The Kogi truck serves up hot, fresh Korean-fusion cuisine, including tacos, burritos and sliders. Choi started out by selling his fare to hungry club goers by camping out at popular hot spots late night, and the popularity of the Kogi BBQ truck soon went viral, and now boasts an ever-growing cult following.

When I started my freshman year at UCLA, I would occasionally hear people buzzing about some mysterious taco truck they called Kogi. My curiosity was piqued, and I eagerly awaited my opportunity to be initiated into the cult. It was almost a secret when the truck would be around campus, and you had to be “in the know” to find out. (Actually, the info is readily available on their Web site, but making it seem exclusive is more fun.) One night, the stars finally aligned and it was my night to experience Kogi. My friends and I tracked down the truck’s location, and there was a line forming before it had even arrived. My excitement grew as I inched toward the order window, and the smell was splendidly intoxicating.

I ordered my tacos — one short rib, one spicy pork — and it was the best $4 I had ever spent in my life. I took my first bite and I was sent to a massive flavor rave. Homemade tortillas cradled quality, tender meat that was spiced and sauced to perfection, topped with a sprinkling of onions, cabbage and cilantro. I hit them with a squeeze of lime and Sriracha, and had the closest thing to a religious experience I have ever known. It was all I could do to savor, and not inhale.

The tacos have an enigmatic flavor profile while maintaining a beautiful simplicity at the same time, and they are gourmet without being pretentious. Choi’s recipes are made from layering passion, love, family traditions and a colorful L.A. upbringing, creating a one-of-a-kind mosaic of flavor.

A deeply rooted, incurable addiction began that night. Kogi was like a gateway drug, and I became a food truck stalker, constantly fiending for mobile meals. I have eaten from a lot of different, delicious, unique trucks, but Kogi will always have my heart. It is simply irreplaceable. There are plenty of Korean taco trucks roaming the streets, but none as perfect as Kogi.