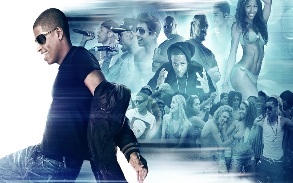 We The Party is a colorful, multicultural comedy about a group of teenagers coming of age in a modern-day America, rife with conflict. The film attempts to bridge a generational gap, the product of cinematic father and son duo, Mario and Mandela Van Peebles.

“Teenagers are at the center of a seismic cultural shift,” says writer/director Mario Van Peebles. “Their world is changing fast, from their music to their dancing, jerking, twerking, skateboarding, dating and Facebooking.”

The movie chronicles the adventures of five friends from different backgrounds as they plot to lose their virginity, out-maneuver the school bully, and take the girls of their dreams to prom.

“We The Party is not necessarily how adults want us to be but how we are,” says 16-year-old Moses Arias, best known for his role on “Hannah Montana.”

The film tries to stay authentic to the youth experience, right down to the musical acts highlighted throughout. It features a mixture of music heavyweights, such as Snoop Dogg, and up-and-coming performers like YG, the New Boyz, the Rej3ctz and the Pink Dollaz.

“Mario’s kids were fans of our music,” says the New Boyz, who perform in the film. “He wanted to make a legit movie about today’s teenagers with the new music style and swag.”

Van Peebles seems to have had a real knack for showcasing new talent when selecting the artists featured.

“The New Boyz had 50 million hits on YouTube when we shot the film,” he says. “’Cat Daddy,’ which the Rej3ctz perform in our prom scene, was not even a single yet. Now, it has more than 60 million hits. YG, who plays our bad boy in the film, was all ready performing on stage with hip-hop’s ‘dog father’ Snoop, so it was natural to pair him up as Snoop Dogg’s younger brother.”

Van Peebles chose Los Angeles as the setting because he felt that it was the center of the new dance movement, and wanted to capture the heart of these emerging dance styles by filming on location in one of L.A.’s tougher areas, Baldwin Hills.

“We The Party comprises a broad cross-section of teens from different races and backgrounds, from gang-bangers, to the skinny jeans and skateboard swag crowd, to the upper-class entitlement kids of Baldwin Hills,” says Van Peebles.

“A while ago, I was writing a new script – or rather trying to write one -- but my teenagers were upstairs blasting music with the volume blaring. I went up to have them dial down the fun, but was quickly entranced by the new dances they and their friends were doing. It was like nothing I had ever seen,” he says of witnessing moves like the Dougie, the Jerk and the Cat daddy. “My curiosity was piqued.”

Van Peebles tried to capture the essence of the movement on film, just as he did in cult street classic New Jack City over 20 years ago.

“Sensing an opening, my wild bunch started begging me to let them go to some all-age underground clubs,” Van Peebles notes. He began going to parties with his teenagers to observe firsthand what their culture was like.

“They were able to show me all the new stuff that was happening,” states the filmmaking vet, who made his film debut in his father, Melvin Van Peeble’s, cult classic, Sweet, Sweetback’s Baadasssss Song.

Van Peebles was amazed by what he was seeing while working on We The Party.

“Everything seemed different somehow,” he says. “Kids of all colors were using the N-word as a term of endearment. One of the most popular kids was an openly gay black boy who could kick your ass with style. Gangster rap is considered old school now. Racial lines are blurring, while economic ones are becoming more pronounced.”

The film's creators think it has the potential to become a coming-of-age classic.

“It’s been almost 20 years since we’ve had a good House Party or Breakfast Club,” says Michael Cohen, Mario’s executive producing partner. “We The Party is going to surprise a lot of people.”

Mario Van Peebles thanked his kids for ushering him into the 21st century.

“I wouldn’t have known what today’s teenagers are experiencing if I didn’t have teens myself,” he says. “This is the first generation to come of age during a black presidency, and for them, it’s not historical. It’s just the norm! For this generation, anything seems possible, both good and bad.”

We The Party opens April 6.

WE THE PARTY Opens in the following Los Angeles area theaters April 6th: