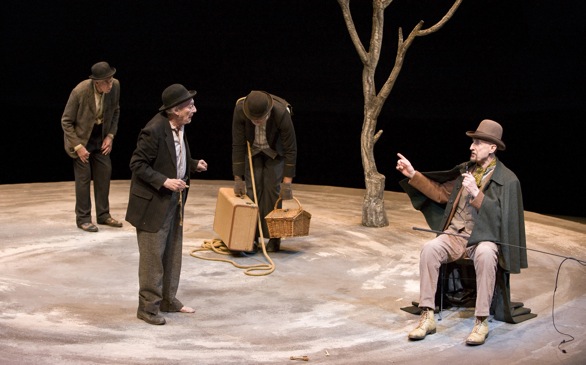 I have always had my own pronunciation for this title, preferring GA-DOH to the alternative GOD-OH. Now that I have heard it spoken from the mouths of some of the world’s foremost Beckett practitioners — Barry McGovern and Alan Mandell — I have been schooled on how Beckett himself said it (it’s GOD-OH, if you were wondering). But no one, not the actors, the director, nor even the great author himself, is suggesting that there is one correct way to interpret this play. When Beckett was asked who Godot is he famously replied, “If I knew that, I wouldn’t have written it.”

Essentially, the stage action is this: two men — Vladimir and Estragon — pass the time on a country road awaiting the arrival of another man. Soon, they are joined by a man and his slave who are passing by. Set on a barren stage, with only one boulder and one lifeless tree comprising the set, this open space allows the vast landscape of the viewer’s mind to wander its own open fields for meaning.

To some, it is a religious search for God; the spending of time on earth waiting to be “saved” in death by this powerful being that remains invisible. The stellar and seasoned actors in the Mark Taper production, who have been associated with the play and the playwright for 50 years, have found many meanings since it was premiered in the mid-20th century.

When Alan Mandell, who plays Estragon, performed the play at San Quentin Prison, the inmates found their own lives acted out by this characters. James Cromwell, who plays the “master” Pozzo, recalls performing it in the South during the civil rights era, when freedom fighters and ministers could see their own struggle in the faces and words of the two protagonists.

Beckett wrote it after WWII when he escaped the Nazis in France, so it might be based on his personal experiences, or that of the Holocaust victims. Or maybe it’s about a day in the life of dogs. Or any animal. Or man as animal. You see what I mean?

That is the exquisite joy of Beckett, and the reason he was the instigator of the modern theater, or “Theatre of the Absurd,” that moved beyond the traditional “rules” of stage drama and its storytelling. The words may sound random, but they are orchestrated in a way that creates meaning. Repetitive phrases, loud soliloquies and moments of silence play out like a song, with chorus and verse.

Barry McGovern’s portrayal of Vladimir finds the perfect pitch for the internal music and rhythm to ride us through the poetry of Beckett. I have often thought Beckett could be performed as dance, because the eloquence is in the movement more than the script.

Director Michael Arabian plays up the comedy of the piece in the first act, and then devolves into the more underlying existential crisis of the situation in the second act.

If you try too hard to follow the script, it becomes a bottomless quagmire of confusion. This is particularly evident during the only speech from the “slave” Lucky, played by Hugo Armstrong, who rattles off a 10-minute tirade of words and phrases that reach and loop like the flight of birds, never sitting too long on any one thought, before he cowers back into submissiveness.

However, if you can let it all flow through and over you, it can be a very powerful experience that allows you to notice your current time and space, and leads you to evaluate what you are waiting for.

"Waiting for Godot" is playing now through April 22 at the Center Theatre Group/Mark Taper Forum, 135 N. Grand Ave., Los Angeles, CA. For tickets and information, go to www.centertheatregroup.org or call (213) 628-2772.