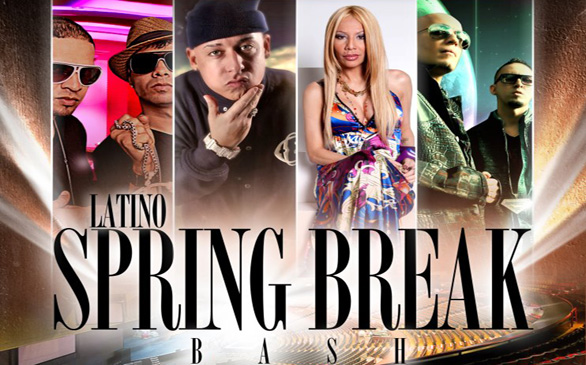 Reggaeton keeps growing in popularity, so much so that this music genre has profoundly penetrated not only the Latin community in Los Angeles, but the music scene as a whole.

SBS Entertainment is proudly presenting Latino 96.3's Spring Break Bash on Saturday, April 14, at Universal CityWalk's Gibson Amphitheatre. The show includes performances by Ivy Queen, Cosculluela, Alexis & Fido and Plan B. All are accomplished artists that have gained a successful career through the originality of their music.

Now, they are uniting for one night of pure classic and modern reggaeton, that will surely be a fascinating performance. So, what can the audience expect?

Considered by many as a pioneer of the urban genre, Ivy Queen's fiery demeanor on stage speaks to ladies everywhere. In her songs, this talented woman known as The Undisputed Queen of Reggaeton, writes and sings her lyrics from the heart and soul. Ever since day one of her incomparable career, she has based her repertoire on personal experiences. More often than not, the Latin Grammy nominee uses her songs to speak out against men: "Te He Querido, Te He Llorado" (I've Loved You, I've Cried For You) and "Que Lloren" (Let Them Cry) are prime examples of this.

Two different duos -- Alexis & Fido and Plan B -- represent the romantic aspect of reggaeton, while still maintaining the genre's uptempo style. Consisting of Raúl Alexis Ortíz and Joel Martínez, Alexis & Fido are well known for their distinguished tunes, such as "Energia" (Energy), "Tiburón" (Shark), "5 Letras" (5 Letters) and "Bartender," among many others.

Plan B, on the other hand, sing about topics like infidelity, sex, love and relationships. Comprised of two cousins, Orlando Javier Valle Vega and Edwin Vázquez Vega, Plan B are known as The Duo of Sex for their spicy tracks and sexual lyrics. "Es Un Secreto" (It Is A Secret) and "Si No Le Contesto" (If I Don't Answer) have been topping the charts almost everywhere due to their contagious sounds and infectious lyrical themes. Both hits have solidified Plan B as an integral part of reggaeton.

Last but not least, there is Cosculluela (José Fernando Cosculluela Suárez). This 31-year-old gained tremendous recognition over the last two years for the releases titled "Prrrum," "Cuidau Au Au" and "Si Tu No Estas" (If You're Not Here). Cosculluela's 2011 album El Niño (The Boy) was one of the most anticipated releases of the year.