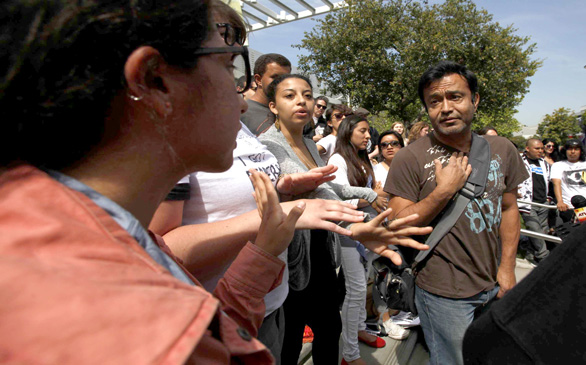 The head of California's community college system on Wednesday asked Santa Monica College to put on hold a controversial plan to offer higher-priced courses this summer while the legality of the program is determined.

Chancellor Jack Scott said he made the request in a call to college President Chui L. Tsang during which he also expressed concern about a student protest in which several people suffered minor injuries when a campus police officer discharged pepper spray at a Board of Trustees meeting Tuesday evening.

"No one likes to see something like this happen, and I expressed that it might be wise to put this matter on hold," Scott said in an interview.

The chancellor contends that Santa Monica's plan to charge more for some high-demand, core courses such as English, math and history violates state education codes. Scott has asked the state attorney general to provide an opinion, and he said a response is expected within a week.

Beyond the legal question, Scott said he fears that the plan would shut out students who can't afford the costs - expected to be about $180 per unit versus $46 per unit for state-subsidized classes.

Santa Monica College officials argue that students who can pay more would be able to enroll in the classes they need to transfer and graduate and that the plan is a necessary response to rising demand and dwindling state funds.

Scott said he was concerned that the program, believed to be the first of its kind in the nation, would set a precedent that other cash-strapped colleges would follow.

"I do have some sympathy in the sense that the state has not given sufficient funding to community colleges to offer all courses we'd like to offer and that has denied students the education they should have," Scott said. "But it does seem to be a little out of line with our mission."

Santa Monica officials contend that their new concept could withstand legal scrutiny but said they are considering the chancellor's request.

"The president will discuss it with the board to get a sense of where they stand," said spokesman Bruce Smith. "He listened to what the chancellor had to say but was noncommittal. No decision has been made at this point."

Earlier Wednesday, Tsang issued a statement defending the dual program against accusations by many students that it promotes the privatizing of public education.

The trustees discussed the two-tier system Tuesday evening and committed to moving forward despite criticism. But they also vowed to review its successes and failures and said the program is a pilot that might need to be fine-tuned - or even abandoned.

The incident Tuesday resulted in three people being taken to hospitals and released, and 15 to 30 others being treated at the scene by Santa Monica Fire Department paramedics. No arrests were made.

In the statement, Tsang said police officers exercised restraint even though a segment of students had acted unlawfully, including setting off fire alarms and trying to disrupt the meeting.

"Santa Monica College regrets that a group of people chose to disrupt a public meeting in an unlawful manner," said Tsang. "The college has launched a full investigation into the matter."

On Wednesday, it was mostly business as usual at the 34,000-student campus. Several students who had been at the board meeting the previous evening held a news conference on the steps of the library to recount events. Among them was Kayleigh Wade, who said protesters were pepper-sprayed without warning.

"There is no way to justify this behavior by police officers," said Wade, 19.

But others students said police acted properly in defending themselves and others after the crowd got rowdy.

Ernie Sevilla said that he was next to the officer who used the pepper spray and that both were pressed against the wall by students.

The officer, he said, followed his training. "What else was he to do?" Sevilla said.

Students chanted, "No cuts, no fees, education should be free" after the news conference. A few wore white T-shirts that read: "I was pepper sprayed." Students said they want the college to hold a campus-wide referendum on the two-tier plan

The Santa Monica melee follows high-profile incidents in November in which police used pepper spray to disperse student demonstrators at the University of California, Davis and at a meeting of the California State University Board of Trustees.