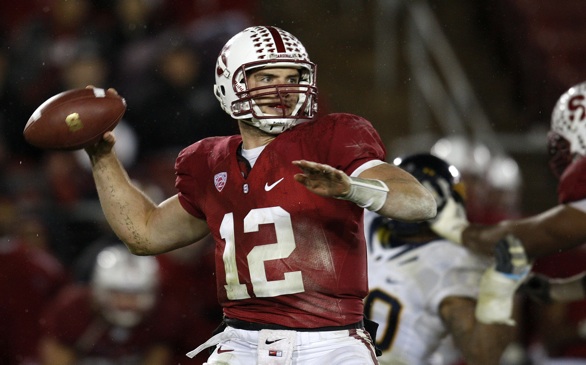 1) Indianapolis Colts: QB Andrew Luck (Stanford) (6’4”, 235 lbs.)
Even with the meteoric rise of RGIII, this pick has been inevitable for months. The Colts will select the most polished player in this year’s draft at the game’s most important position. They will need all the luck they can get filling Peyton Manning’s legendary shoes.

2) Washington Redskins (trade with Rams): QB Robert Griffin III (Baylor) (6’2”, 220 lbs.)
The Redskins made one of the biggest trades in NFL history to move up from the No. 6 spot to grab the super-athletic Heismen Trophy-winner out of Baylor. There is no question these two signal callers go one and two.

3) Minnesota Vikings: LT Matt Khali (USC) (6’6”, 306 lbs.)
The Vikings have a young quarterback in Christian Ponder, who they need to upright in a very tough division. Khali is considered as good as an offensive tackle as prospects get. Sounds like a match made in heaven for a team coming off a rough year.

4) Cleveland Browns: RB Trent Richardson (Alabama) (5’11”, 220 lbs.)
Mike Holmgren is not known for taking wide receivers high in the draft, but if Colt McCoy is to be their guy, he needs some playmakers. Although running backs seldom get selected in the top 10 anymore, Richardson is too promising to pass up, and will take some of the weight off the passing game.

5) Tampa Bay Buccaneers: CB Morris Claiborne (LSU) (6’, 188 lbs.)
With current Bucs starters at the cornerback position either looking at prison time (Aqib Talib) or the end of a long career (Ronde Barber), Tampa Bay is in dire need. They are thrilled that a cover-man as talented as the Tiger’s Claiborne is theirs for the taking.

6) St. Louis Rams (trade with Redskins): WR Justin Blackmon (LSU) (6’1”, 211 lbs.)
Jeff Fisher’s Rams look like geniuses after gaining two future first-rounders from Washington to move from the No. 2 spot, and still get the player they were targeting. Sam Bradford has good potential but needs a stud receiver to help him burn defenses. “Bradford to Blackmon” has a nice ring to it.

7) Jacksonville Jaguars: DE Melvin Ingram (South Carolina) (6’1”, 264 lbs.)
The Jags’ greatest needs are receivers and pass rushers. Although they may be tempted to reach for Notre Dame’s Michael Floyd, expect them to solve their defensive deficiency with their first selection. A defense cannot be elite without pressure on the quarterback, and Ingram will certainly bring that to the south.

8) Miami Dolphins: QB Ryan Tannehill (Texas A&M) (6’4”, 221 lbs.)
After missing out on signing Manning, Matt Flynn or Alex Smith, the Dolphins must find an offensive leader behind center. Many consider using a Top 10 pick on Tannehill to be a stretch, but he has good raw skills, and Miami will hope his upside leads brings their Super Bowl aspirations to fruition.

9) Carolina Panthers: DT/NT Dontari Poe (Memphis) (6’4”, 346 lbs.)
The Panthers are in serious need of help along their interior defensive line. No player’s stock has gone up more since the Combine than Poe’s. Showing amazing speed for his size, as well as great strength and footwork, look for Carolina to take a chance on this highly athletic tackle with so-so college production.

10) Buffalo Bills: OT Riley Reiff (Iowa) (6’5”, 313 lbs.)
After signing Mario Williams and Mark Anderson to anchor the defensive line, the Bills can turn their focus to the opposite side.  Buffalo could be next year’s dark horse in the AFC, and protecting Ryan Fitzpatrick’s blind side is an absolute must to edge out the Patriots in the east.

Football
Mahomes’ new deal is a record, and the Chiefs have been right about him at every step
504 views

Football
NFC preview: How the Eagles stack up against the rest of the conference
1,215 views