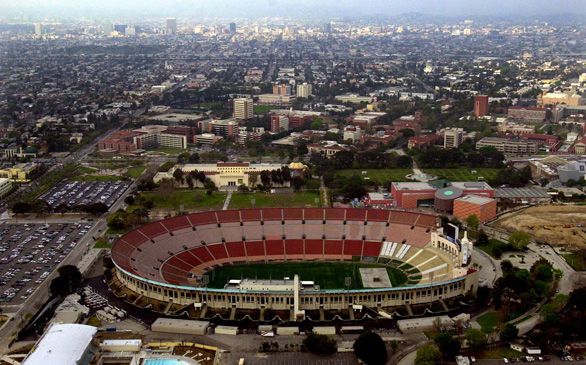 Staggered by a financial scandal that unfolded on their watch, the public officials who run the Los Angeles Memorial Coliseum are preparing to turn over control of the taxpayer-owned stadium to USC under a lease that would deliver it into private hands for up to 42 years.

The deal would essentially end the Coliseum Commission's stewardship of the 88-year-old landmark - built as a memorial to World War I veterans - whose mismanagement led to a sweeping criminal indictment of key executives last month.

USC would be responsible for staffing, day-to-day operations and event scheduling, among other duties. The government panel, composed of state, county and city appointees, would perform only a limited oversight role.

The confidential lease draft, which the Los Angeles Times obtained, states that the school would receive lucrative naming and advertising rights to the Coliseum. USC could restrict use of the stadium for "public interest" events, such as a community Fourth of July celebration, to eight per year.

The commission has also proposed including its parking lot, its roadside sign on the 110 Freeway and even the companion Sports Arena in the package.

USC would have the options to operate the Sports Arena, hand it back to the panel if the structure became a burden or demolish it to build something like a soccer stadium.

In return, USC would assume about $1 million in annual rent payments that the Coliseum makes to the state, which owns the land. It would maintain the property and complete a host of renovations that would be funded in part with stadium revenues. School officials say the improvements would cost about $70 million.

USC would also pick up costs of a new sound system, video board and some commission administrative tasks.

The commission has conducted the lease negotiations with USC in secrecy and has not released a draft of the agreement. The panel takes up the matter at its monthly meeting Wednesday. A final vote could come next month.

Commissioners who favor the lease have said the public would win because the agreement calls on USC to refurbish the Coliseum and ensures the stadium's future as home to the school's Trojan football team. "Without this kind of deal, the Coliseum is going to be a museum piece," said county Supervisor Zev Yaroslavsky, a commissioner.

In a statement Tuesday, Thomas Sayles, senior vice president for University Relations at USC, said: "Our goal is to make the Coliseum a proud landmark and gathering place for all Angelenos. We support public disclosure and discussion of all lease terms before any deal is approved."

Some outside experts are dubious about the proposal, labeling it extraordinary. They say USC would reap most of the benefit of the stadium upgrades that represent the school's main contribution to the agreement.

"I don't know of any situation that is like this, where a public stadium is turned over to a private school," said Andrew Zimbalist, a sports economist at Smith College in Massachusetts. "It's perplexing. It seems that the Coliseum could have done a lot better bargaining job."

On the other hand, Zimbalist said, "The alternative is to have an incompetent commission run this thing."

The commissioners have negotiated a few sweeteners for themselves. They would get the equivalent of 10 free tickets each to every Trojan contest at the stadium, plus premium parking, as well as access to a VIP hospitality area on game days.

And USC would try to score the commissioners free tickets for any NFL games played at the Coliseum. A commission attorney said the gift of tickets follows a longtime policy that says panel members need to monitor stadium operations.

Last month, criminal charges were filed against three former Coliseum managers, two prominent rave concert promoters and a stadium janitorial contractor. The district attorney's investigation into a rash of alleged bribery, kickbacks and conflicts of interest grew out of Times reports on financial irregularities at the stadium.

The sixth defendant, former janitorial contractor Tony Estrada, who has said he did nothing wrong, told the Times this week that he is in "the jungles of Brazil" and will not return to stand trial.

Former commissioners and others say the lease is a reflection of the Coliseum agency's fumbling record as an overseer.

Rick Caruso, a high-end mall developer who quit the panel last year, said: "The reality is that the commission put itself in a position that it didn't have any options. They created this mess."

A USC alumnus who sits on the school's governing board, Caruso resigned from the commission after a panel attorney determined that he could not participate in the lease talks because of his ties to the university. He supports the lease.

"Sometimes in business you do not have an upper hand," Caruso said of the commission's negotiating position. "But the cause and effect was the lack of leadership and accountability on the Coliseum Commission."

Another former commissioner and USC product, W. Jerome Stanley, echoed those sentiments, although for different reasons. He resigned shortly before Caruso, frustrated by the panel's failure to flex the political and financial muscle to lure the NFL back to a refurbished Coliseum, in partnership with the university. The last of three professional football teams to play there, the Raiders, left in the 1990s.

"The commission could've redone the Coliseum and taken care of USC," said Stanley, a sports attorney with business and law degrees from the school. The free-ticket clause took him aback.

Stanley said USC will be a smarter Coliseum manager than the commission has been, but he expressed regrets that the proposed lease would kill any hope of a permanent NFL tenant.

The terms generally require USC to cooperate with efforts to place a pro football franchise at the Coliseum temporarily while a new NFL stadium is built elsewhere here. But USC would have the right to veto the arrival of an NFL team that would pose security or safety problems, a veiled reference to the Raiders, who had a reputation for drawing unruly fans.