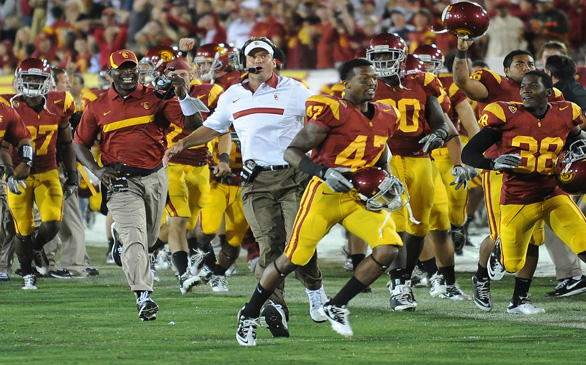 Quarterback Max Browne had seen enough. He was ready to make a decision.

The nation's top-rated passer according to both Rivals.com and Scout.com announced Wednesday he will play college football at USC.

"As more and more offers came in, I was able to evaluate schools, talk to a bunch of coaches and meet some great ones but, at this point, I've seen enough," said Browne, from Skyline High School in Sammamish, Wash. "It's time to pull the trigger so I can move on to Skyline football and winning another state title."

After landing Lakes lineman Zach Banner just before signing day in January, USC reeled in the state's top recruit in the 2013 class. Browne can sign a letter of intent with the Trojans on Feb. 6, 2013.

The Trojans didn't sign a quarterback in 2012, so Browne fills a position of need, considering Matt Barkley is preparing for his senior season. Like Barkley, who won the starting job as a freshman, Browne is currently working toward graduating early so he can enroll at USC in time for spring football.

Browne is no stranger to taking over for big names. He spent his freshman year at Skyline as Jake Heaps' understudy. Spartans coach Mat Taylor turned the team over to Browne as a sophomore and he proceeded to pass for 4,182 yards and 50 touchdowns, leading the team to the Class 4A state-title game.

Browne topped the 4,000-yard mark again during Skyline's state-title run in 2011 and has thrown for 8,216 yards and 95 touchdowns in two seasons.

Now that the decision has been made, Browne can get back to preparing for his senior season, which includes major matchups against out-of-state opponents - Manatee of Bradenton, Fla., and Cottonwood of Murray, Utah.

"We have a huge schedule ahead of us and I wanted to focus on it with all the guys," Browne said. "I just kind of want to move on to Skyline High School football."