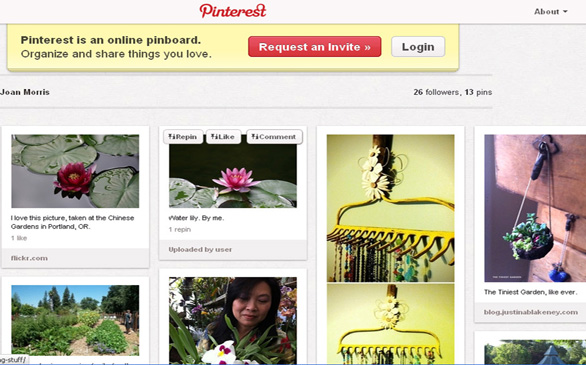 An Experian Marketing Services report found marked increases in visitors to Pinterest's website, including a 50 percent gain from January to February that made it more popular than LinkedIn or Google+.

The Palo Alto, Calif., company has found an ever-growing audience for its digital bulletin boards, which allow users to collect and share digital images and link them to websites. Since co-founder and CEO Ben Silbermann launched the social network in January 2010, it has become especially popular with hobbyists.

Experian research showed that the site's visitors were demographically different from those visiting other social networks, with women accounting for 60 percent of the visitors and a higher percentage of users in the Midwest, Northwest and Southeast.

Alexa, a Web-analytics company that uses a combination of visitors and page views to rank the most popular sites on the Web, disagrees with Experian, currently ranking Pinterest fourth among social networks, behind LinkedIn. The site ranks Pinterest as the 16th most popular website in the United States, ahead of such stalwarts as PayPal, ESPN.com and The Huffington Post.

Other social-networking sites are still growing, as well, though not at as fast a pace as Pinterest, Experian reported. From December 2010 to December 2011, Twitter grew 45 percent and LinkedIn grew 98 percent, according to the annual report. Growth will be hard to sustain, however, as Experian says that 91 percent of online adults in the United States already use social networking "regularly."

Special Features
6 ways to cut back at work and be instantly happier
4,340 views

Special Features
Ticket costs for theme parks climb more than for other forms of entertainment
2,418 views

Special Features
Ringling Bros. and Barnum & Bailey to Debut Out Of This World Circus Experience
6,203 views