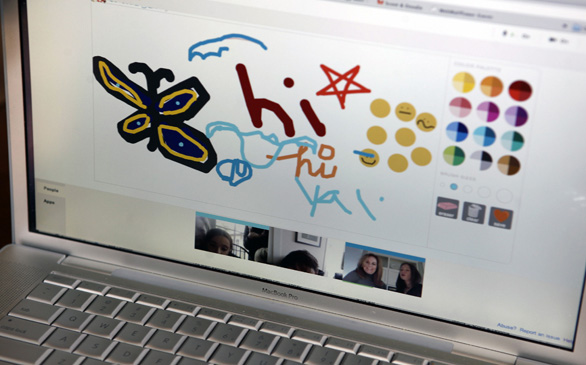 Christine Egy Rose realized she was on to something powerful. Instead of the awkward monosyllabic two-minute exchange her two-year-old son Jackson typically had over a video chat link with relatives, he spent a full 50 minutes happily working on a shared drawing with his grandmother in Florida, using the video chat's embedded drawing feature that Egy Rose was developing.

Egy Rose 's mother-in-law, feeling so much closer to the little boy in California, was almost in tears by the end of the chat..

"We don't have the Sunday night dining room table anymore _ at least a lot of families don't _ and the three of us didn't," Egy Rose, the founder and CEO of the video chat and collaborative play startup Scoot & Doodle, said in an interview with co-founders Patty Chang and Sarah Stone. "We wanted to recreate that for our families."

With last week's launch of the first half-dozen apps for the "Hangouts" video chat feature of Google+, the Internet giant hopes to increase the time people spend on the social network and create a popular platform that will ultimately grow to of hundreds of video apps, or more. Hangouts allows up to 10 people to connect on a video chat.

"It's really the starting gun," Vic Gundotra, the executive who heads the development of Google+, said of the platform launch. "No one has ever done a multi-user video service for the whole world for free, let alone open it up to developers and see where they take it. It takes a company like Google, at Google's scale, to do something like this, and let's see what happens."

In opening Google+ Hangouts to independent developers like Scoot & Doodle, Google is cribbing a page from Facebook. When CEO Mark Zuckerberg opened Facebook's platform to independent developers in 2007, no one knew it would trigger a revolution in social games that spawned successful companies like Zynga. More recently, Facebook also has offered shared-experience services, such as a feature launched in January that allows friends to listen to the same song at that same time. Facebook has also partnered with Skype to provide video chat.

At more than 100 million users, Google+ is still a fraction of the size of Facebook's 845 million users. But an even bigger issue for Google+ is poor engagement, with recent data from comScore showing users average just 3 minutes a month on Google+, compared to 7 hours a month on Facebook.

The Hangouts feature is "one of the four or five pillars that we have that really drive engagement," Gundotra said. "It fundamentally changes the interaction when you can see somebody's eyes, which is why we said social is much more than just status updates. That's why we invested so much in video technology."

Among the other Hangout apps on Google+ is a virtual deck of cards, allowing a person in San Francisco, for example, to play a game of poker through a video chat with a cousin in Denmark and an aunt in Denver, as well as other apps.

"Google is really hoping to drive engagement with its network, and getting people to stay online and use its services more is absolutely something it wants to do," said Irene Berlinsky, an analyst with IDC who follows video chat. Along with Skype, Google is emerging as "really the two big gorillas" of video chat, she said.