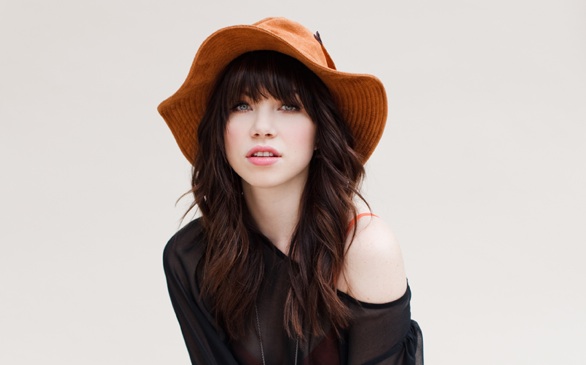 If you haven’t heard of Carly Rae Jepsen yet, you should probably YouTube “Call Me Maybe” immediately –and just try not to listen to it 20 times in a row.

The Canadian singer and songwriter reached seemingly overnight success when Justin Bieber released a YouTube video of him and his pals – including girlfriend Selena Gomez and Disney starlet Ashley Tisdale – lip synching along with Jepsen’s infectiously pop-y hit. The video racked up a million views in 24 hours, and it now has more than 28 million views.

Jepsen, who was already a noted singer in her native country after placing third on “Canadian Idol,” was shocked when she first saw the video.

“I found it hard to believe at first,” she says. “I was home in Canada and someone had posted it on my Facebook, and as I was watching it I remember thinking, ‘That boy looks a lot like Justin Bieber.’ I kind of squealed like a 13-year-old, and just had to collect myself. It’s still very surreal.”

The 26-year-old remains humble despite the fact that “Call Me Maybe” has been certified double-platinum in Canada, where it also reached the top of the charts.

“I am still kind of floored by [the song’s success],” Jepsen admits. “When you begin a song on tour with one of your pals, and it turns into something that’s heard in cities you’ve never even traveled to before, it’s hard to believe.”

She attributes much of the song’s popularity to Bieber’s promotion of it.

“I think of a lot of what’s generated awareness has been the support of Justin [Bieber],” notes the singer. “I don’t really know how it has the success it has had, but I’m very grateful and very happy about that.”

Jepsen has since met Bieber, and their introduction led to a spontaneous creative collaboration.

“When I met him for the first time ever, he kind of just threw [a song] at me, and told me that if I wanted to sing on it, I could sing that night; seconds later I was thrown into the booth and away we went,” says Jepsen, who describes the resulting duet as “really beautiful.”

When asked about the experience of working with Bieber, she replies, “It was nerve-wracking to say the least. I was petrified that no sound would escape, but I think it came out well. It’s moments like that that you just can’t let your nerves overtake you, otherwise you’ll miss the moment.”

While there are no set plans regarding the duet’s release as of yet, fans can catch Jepsen singing some of her other tunes when she performs at 5Towers at Universal CityWalk in L.A. on Saturday, April 14.

“I’m actually on a radio tour right now, and I’ve been singing ‘Call Me Maybe’ like eight times a day, so I’m really looking forward to singing some other songs!” exclaims Jepsen. “It will be fun to do an entire set of music again.”

Carly Rae Jepsen will be performing a free concert at 5Towers at Universal CityWalk on April 14 at 9 p.m. To find out more about Jepsen, visit carlyraemusic.com.