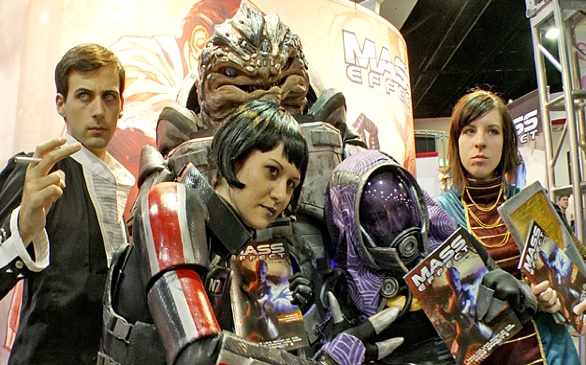 A few years back, Morgan Spurlock met Stan Lee, and during their small talk they tossed around the idea to make a documentary about Comic-Con.

The idea immediately gained the support of many pop culture industry greats and an excited community of fans. Thus Comic-Con Episode IV: A Fan's Hope was born!

The movie centers on five people that any Comic-Con attendee could relate to: Eric, an aspiring illustrator, hopes to impress publishers and land a job; Holly, a costume and creature designer, hopes her creations will win the big prize; Chuck, a long-time comic book dealer, is looking for a big sale to pay off his debts; Skip, an amateur illustrator, wants to be discovered at this year's event; and James, a young fan, hopes his girlfriend will accept a dramatic proposal.

Following these real people gives you a true sense of the world pop-culture enthusiasts live in, and in a way, the journeys of these fans follow the tales of the heroes they admire. You cheer on the artists who take on the industry to make it. You hope Holly’s Mass Effect costume will take away the top prize, that Skip will sell the rare Red Raven issue to buy a new location, and that James can escape his girlfriend for just one minute to run and grab the engagement ring he had made for her, culminating with his attempt to pop the question at a Kevin Smith panel.

These stories are intermixed with accounts of what Comic-Con means to dedicated followers, including one-on-one interviews with Comic-Con veterans who have turned their fanaticism into careers, such as Stan Lee, Joss Whedon, Gerard Way, Frank Miller, Kevin Smith, Matt Groening, Seth Rogen and Eli Roth.

For those who have never attended the convention, the film provides a unique inside look at all the panels, parades, photos, costumes, crowds and sense of community amongst like-minded individuals that make up one of the largest fan meet-ups in the United States. And for those who attend religiously, this movie is a love letter to their passions.