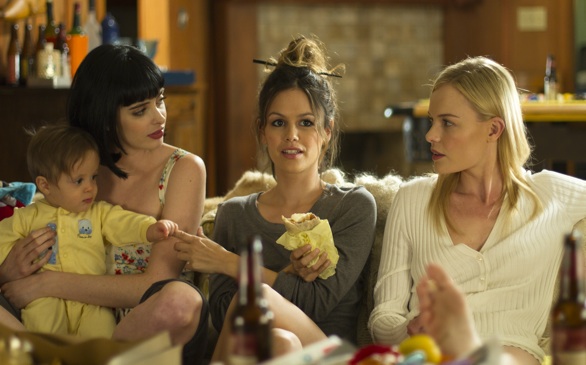 These days, you can't talk about chick flick movies without mentioning Bridesmaids. Apart from being one of the top grossing films of 2011, Bridesmaids proved to the world that women can be just as funny and raunchy as men, without losing any of the heart-tugging strings of friendship and love. Since then, independent filmmakers have continued to explore comedic takes on the unexpected surprises life throws our way from a female perspective.

In Kat Coiro’s L!fe Happens, Kim (Krysten Ritter), a quirky and carefree dog walker finds herself a new mother, compelled to put her bustling social life aside. At first she feels lost in her new way of life, but with the help of her roommates, the brainy and ambitious best friend, Deena (Kate Bosworth) and scatterbrain Laura (Rachel Bilson), Kim does her best to cope with single motherhood. Things take a turn for the worse when Kim lies about being a mother in order to get back into the dating world, which leads to a series of lies spiraling out of control that eventually threatens Kim and Deena’s friendship.

Longtime friends Coiro and Ritter wrote the script over the course of almost three years. The initial idea was the result of a eureka moment straight from Coiro’s own life, when a brief flirtation at a stoplight was cut short by baby wails in the backseat.

The resulting film provides a realistic but heartfelt insight into the various ways different people deal with parenthood, womanhood and changing diapers.

“You have Deena who is very career-driven, Laura who is marching to her own drummer, and you have the stay-at-home mom,” says Coiro of the different characters. “Then there’s Kim, who doesn’t know where she fits. It’s about that journey of finding where you fit.”

No matter what kind of woman you are, when a little thing called life happens, we wouldn’t be anywhere without that girlfriend by our side. The challenge is remaining friends, as each must go on their own paths. Coiro and Ritter are no strangers to female breakups as they’ve reached new stages in their lives, both personally and since making it to Hollywood.

“[Ritter] and I wrote the script over many years, and we were very good friends, but as you create things together and as your careers go in different directions, there are tensions that flow,” says Coiro. “We put a lot of, not just our relationship, but other relationships we’ve seen into the script, where one girl is going one way and the other is going another way.”

This is acted out through the relationship between Kim and Deena, who begin to drift apart and enter different social circles, but find a way to keep their friendship strong, despite interference from babies and men.

“It’s really about how you continue to grow together, if you can,” says Ritter.

The subject of friends drifting apart is one we are all too familiar with, and the film portrays it in such a realistic way it is sure to melt your heart.

Ritter gives a peachy performance as the lost mother, who along the way of baby play dates and a few humiliating dating incidents, finds that her true place is as good mother and friend.

“All these women don’t do it perfectly,” explains Coiro. “They make their rules, they break their rules, and they go down the wrong path, but that’s how you find your path.”

L!fe Happens is a touching chick-flick with a perfect harmony of comedy and romance, without losing any of the rowdiness. This film is sure to have you and your girlfriends howling and crying until the end.