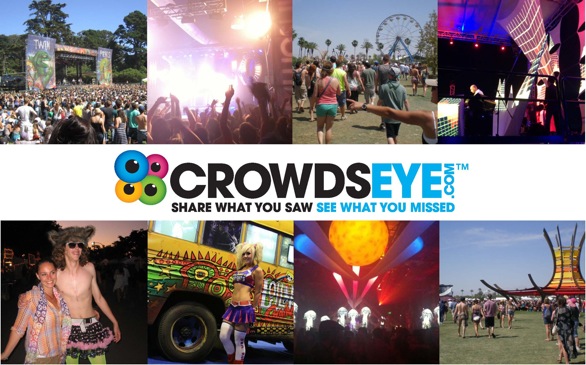 There’s a buzz swirling around music fans this week, who are giddy with the usual anticipation that bubbles up around this time every year.

Yes, festival season is back.

Coachella returns this weekend under its new format, and those making the trip out to Indio, California, for one of the two three-day sessions are in for quite a treat.

Featuring a slew of top-notch artists, including headliners Radiohead, Dr. Dre & Snoop Dogg and the Black Keys, this year’s lineup once again covers a remarkably wide range of genres. Whether it’s indie rock, hip-hop, folk or electronic, Goldenvoice has made sure once again that there’s something for everyone’s ears to enjoy.

But what if two of your must-see bands are playing at almost the same time? What do you do then?

Matt Braun, 26, is trying to answer some of those difficult questions for festivalgoers after spending the past 12 months developing an idea he conceived at Coachella two years ago.

Originally stemming from his interest to create a music festival scavenger hunt, he launched CrowdsEye.com this year at South By Southwest as the first social network to target live events.

“We provide a way for you to be everywhere at once — as much as that’s possible digitally.”

The company’s slogan — “Share what you saw / See what you missed” — drives home that point fairly well, yet Braun’s initiative spans further than just an online database to store fan-generated content.

While Facebook and Twitter have dominated social media culture over the past five years, CrowdsEye attempts to build its own user base by incorporating interactive gaming into its business model. Not only will users be able to relive each other’s experiences through photos, videos and stories, but they’ll also have the opportunity to win prizes for their own content.

At Coachella, CrowdsEye will be giving away $1,500 in prizes as contestants bid to win categories such as “Great Moments in Hookup Failure,” “Backstage Adventures,” “Best Costume,” “Coachella on Wheels,” “Caught in the Act” and “Best and Worst Tattoo.” The challenge begins April 11 and ends May 7.

Users are encouraged to vote, comment and bookmark submissions they feel strongly about, which will be organized by hashtags, date, location and popularity for easy accessibility.

“I think it is far more compelling and authentic to see what the people who were there thought, to be able to get their point of view through their eyes,” Braun says.

“Our vision was to create a home base for all music fans to share, vote on and browse all the crazy content created at each live event,” CTO Andy Magnes adds.

Braun and Magnes certainly know their target audience. Music festival attendees, after all, are some of the most active social media consumers in the country. However, in creating a communal experience similar to one at a live event, CrowdsEye aims to reach more than just music aficionados.

Of course, it will take some time for people to catch on, and as CEO, Braun realizes that.

But with a marketing strategy that caters to event sponsors and the recent release of an iPhone app, CrowdsEye has plenty of potential to grow into something much, much bigger.

“I think when people get it into their hands, they’ll see the value in it,” Braun says.