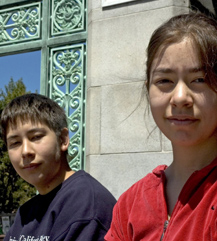 Except for being juniors at one of the nation’s top universities, Charles and Mayumi Pierce are perfectly normal 13- and 14-year-olds, they and their parents say.

Whether they’re geniuses or not is beside the point, said their dad, Wincie Pierce. Where the two San Pablo, Calif., teenagers are academically has more to do with hard work, Pierce said.

"I don’t think I necessarily have talents that other people don’t have," Mayumi said last Wednesday before entering UC Berkeley’s Wheeler Hall for a 1 p.m. undergraduate business administration class. "Other people haven’t gotten the opportunities I have."

Pierce, who owns a start-up real estate company, and his wife, Qin Ma, home-schooled the kids until they entered Contra Costa College at age 9 and 11. The way it turned out wasn’t part of a preconceived plan.

"I don’t think we’re enlightened," Pierce said. "We were just trying to do the best that we could."

The couple met at UC-Berkeley as undergraduates and later lived at University Village in Albany while Ma went to law school. In 1998, they moved to San Pablo, finding housing more affordable there.

The children went briefly to a Montessori School, then learned at home with Ma, the driving force behind their precocious academic prowess, Pierce said. At Contra Costa College, where Ma took a chemistry course with the children, they joined the Center for Science Excellence. Pierce doubts traditional schooling brings out children’s full potential. At the university level, "you have greater control of your individual curriculum," he said. Charles takes philosophy, engineering, chemistry and biology classes at UC Berkeley; Mayumi, engineering, biology, biochemistry and business.

Ma works three jobs these days. Pierce would not say what she does professionally, explaining his wife likes to speak for herself. A native of China, Ma also taught the children Chinese, Pierce said.

Ma did not return a phone message last week. The university’s media relations office, which alerted news organizations to the presence of their two young proteges, said Ma earned a law degree in 2000.

To balance their academics, the children study violin and piano and martial arts. Mayumi also plays the guzheng, a traditional Chinese zither-like instrument. A black sash in kung fu, Mayumi is an assistant instructor at the Golden Lion studio in Albany. Charles took aikido for a few years, switched to fencing, and now studies yongmudo, a Korean martial art.

Tall and serious, Mayumi did not stick out among the several hundred students who entered Wheeler’s auditorium.

"I thought she was a regular freshman," said sophomore Anthony Burgard.

"I feel like everybody else pretty much," Mayumi said earlier. "I just can’t drive."

Charles and Maiyumi expect to graduate in 2007, when they’ll be 14 and 16, respectively. Talking about their future plans, they sounded no different than, well, normal UC-Berkeley juniors.

"I’m planning to go to law school," said Charles, who hopes to major in chemistry as an undergraduate.

Said Mayumi, "After I graduate, I’m going to grad school and study something related to biology, and then get a job."