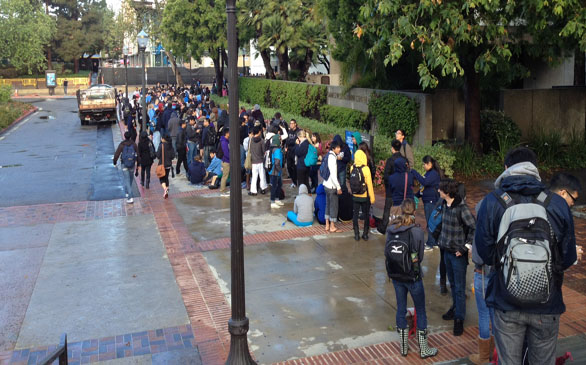 Students camped out over-night and lined up during the peak hours of the morning to purchase tickets for Spring Sing, UCLA’s annual music competition. The box office opened at 8 a.m., by which time about 600 students waited in hopes of scoring tickets to the iconic show.

“We have been here since 11 p.m. last night,” said UCLA sophomore Kaitlyn Williams, one of the many students who braved the rain in order to ensure her spot in line. Spring Sing tickets sold out within five hours in 2011, and many students who waited in line left empty handed. This year, the number of tickets available per student was reduced from unlimited to 12, ensuring that the length of the line was better correlated with the number of tickets being bought.  With this reduction, the Spring Sing Executive Committee hoped that most, if not all, students waiting in line would be able to purchase tikets for the show.

“What struck me was how, despite the rainy conditions, each and every student in line -- though many were still quite groggy -- was excited about the chance to attend this year's show," said Spring Sing Executive Director Kevin Yang. "They inspired me, as the director of this year's show, and were a reminder of how important the event is to the campus community, and how integral it is as a part of the UCLA experience.”

A crowd of 7,000 students, parents, fans and celebrity judges will fill the Los Angeles Tennis Center on May 4, 2012. The show is UCLA’s oldest and greatest musical tradition, annually showcasing solo artists, duets, bands and a capella groups. Previous Spring Sing winners include Sara Bareilles and Maroon 5, who continue to thrive in today’s music industry.

A mix of both new and old Spring Sing performers will grace the stage at this year's event, guarenteeing a unique and exciting show for audience members. As the night draws closer, anticipation rises as students try to predict who the celebrity judges will be, which acts will be their favorites, and most of all, who will be crowned the Spring Sing champion of 2012.