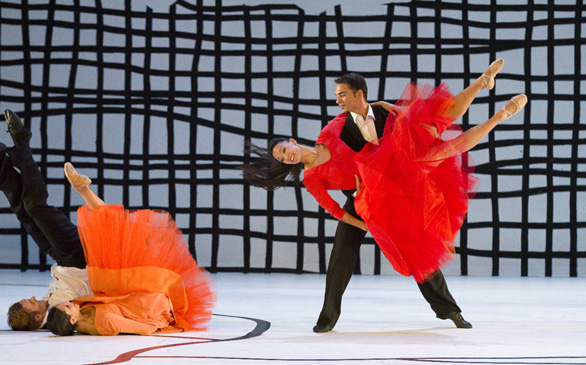 She admits it is an arduous career, one that not many choose to pursue. But for the young and beautiful 23-year old German dancer Isabelle Schramm, her work is a dream come true.

This is the ballet, a theatrical art filled with, well, art itself, including a variety of dances and mystically resplendent wardrobes combined together to tell a story.

“Ballet is my passion,” says the dancer when asked about her inspirations and motivations. “It is a lot of work, but I started loving it when I was a child. I was very passionate about it from the beginning, even though at times, I had a hard time. It was not always easy.”

Schramm seems to have been fated to take part in the craft: her mother was a dancer and her dad was a musician. She grew up in Hamburg, Germany with the arts in her blood, and began dancing ballet when she was only 5.

At the age of 21, Schramm auditioned for Ballet du Grand Théâtre de Genève and received a contract offer. Now she, along with the other cast members, will be making their much-awaited debut on the West Coast.

“It is an amazing feeling to just be on stage,” she says in anticipation.

Schramm will be performing with the upcoming company tour, which includes a stop in Downtown L.A. and will feature three ballet acts, “Les Sylphides,” “Spectre de la Rose” and “Amoveo.”

“When we tour, we all have a lot of fun,” says Schramm, who loves takings walks in the cities where the company tours. “We always have a great atmosphere in the company.”

Frenchman Benjamin Millepied choreographed the three dances, which will be making their North American premiere. Millepied -- who happens to be married to actress Natalie Portman -- is a legend by himself, a former New York City ballet dancer who provided choreography for the Oscar award-winning Black Swan. With Millepied’s expertise translated on stage, “Les Sylphides,” “Spectre de la Rose” and “Amoveo” all promise to be solid performances.

“[Millepied] is great. In three weeks, we did all the pieces,” Schramm says.

However, this meant the rehearsals were sometimes gruelling.

“Some rehearsals go for one day, some go for just hours,” Schramm explains. “It really depends on what we have to do.”

A Swiss company, Ballet du Grand Théâtre de Genève is universally known for its exceptionally trained dancers. Wherever they go to perform, the company delivers unforgettable nights of contemporary ballet.

Both “Le Spectre de la Rose” (music by Carl Maria von Weber) and “Les Sylphides” (music by Frédéric Chopi) are re-imaginings of the original works by Michel Fokine. Meanwhile, “Amoveo” is a piece inspired by Philip Glass’s "Einstein on the Beach" and features costumes designed by Marc Jacobs.

“It is a beautiful performance – refreshing and all about dance,” says Schramm, who appears in “Les Sylphides.” “The costumes are pretty and the music is beautiful.”

Ballet is an amazing dance and career, but anyone with aspirations of it has to love it in order to succeed, says Schramm, who enjoys watching movies, drawing, and indulging on her favorite foods when she's not performing. “You have to be really into it and give it your all,” she says.