McCourt's New Pals Should be on Hot Seat 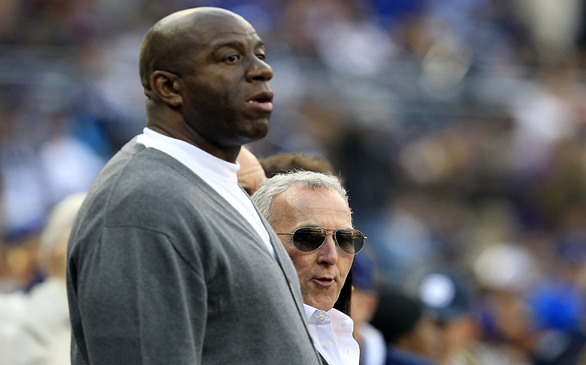 Magic leaves town rather than be here for the Los Angeles Dodgers' opener, and I thought he was going to be here every day.

I know the new group doesn't officially take over until the end of the month, but Magic made it pretty clear he's the new face of the Dodgers.

Maybe he knew Vin Scully was sick and he was worried he would be asked to sit beside Charley Steiner and Steve Lyons.

But then Magic doesn't seem to be the kind of guy who cares where he sits.

We're told he's back in New York for a play, "Magic/Bird," which officially opens on Broadway on Wednesday night.

You would think he would know the outcome of the play since it's based on conversations with him and Larry Bird.

At the very least, the Dodgers figured to play to a bigger audience, and here it is Tuesday and he still has the rest of the day to get to New York.

If he can afford to be part of a $2.15-billion deal to buy a baseball team, I suspect for such a special occasion, he could spring for a private plane to make both events.

Maybe he just didn't want to be caught sitting next to Frank McCourt again and skedaddled to New York as quickly as he could. He's Magic, and he can do whatever he wants.

But that leaves McCourt without someone to hide behind, and I was interested to see who McCourt would use as cover.

Former Dodgers manager Joe Torre is here. He remains a popular figure and he tried to solve Frank's problems by buying the Dodgers.

But when he's asked what he would say if Frank asked him to sit beside him, Torre grins and says, "I'm not allowed to say anything under a confidentiality agreement until the deal closes."

Peter O'Malley is here, and who doesn't like Peter O'Malley? But as much emphasis as O'Malley puts on appearances, no way he's going to go Magic on everyone and be seen sitting next to McCourt.

Tom Lasorda is here. He'll pretty much sit anywhere if lunch is included. He's sitting in Frank's box adjacent to the Dodgers' dugout, but no Frank. Maybe Frank is afraid Tommy will eat his lunch too.

A sold-out Dodger Stadium for opening day, and I worry that McCourt might be sitting somewhere all by himself. Now that would be a photo.

I request an interview with McCourt to find out how he's doing, and a Dodgers spokesman returns with a statement from Howard Sunkin. I forgot all about his flunky, the one paid out of Dream Foundation money, and as long as Howard is on the payroll, Frank will never be alone.

"He's enjoying his day with his friends," Sunkin says by way of the statement, "And he doesn't want to be bothered by you."

The spokesman said McCourt was standing right there with Sunkin and approved the statement.

But wouldn't you like to know who Frank's "friends" are these days? In fact, is that "friend," or "friends"?

We know he has one in Magic, and I watched Frank hug CBS's Jim Hill on the field after the game. And he's probably really fond of the Guggenheim investors who have included him as part of their family.

But what do we know about the Guggenheim investors back in Chicago? It's not as if they're from Boston, but they sure seem far away.

Will anyone be interested in sitting beside them in the coming years?

Here we are on an absolutely perfect day in L.A., Dodger Stadium is filled, and wouldn't it be glorious if happy days were really here again?

You would hope someone from Guggenheim took notice, and understands how deeply McCourt offended Dodgers fans.

McCourt misled fans in Los Angeles from the start, and now we get a replacement in Guggenheim that appears to be just as evasive when it comes to explaining its financial wherewithal.

The last thing any new Dodgers owner should be doing is leaving open the possibility they are as duplicitous as the previous owner.

They won the bid, so what's to hide? Are they trying to keep something away from the bankruptcy judge, McCourt creditors or the public?

The new investors certainly haven't been very forthcoming in explaining McCourt's relationship to them. It makes you wonder if they will be more involved together than they want anyone to know.

And now this from bankruptcy documents as unearthed by the Los Angeles Times' Bill Shaikin: When the sale of the Dodgers goes to closing on April 30, five pieces of property located near Dodger Stadium will be placed in the name of Frank McCourt.

Maybe he's planning on moving out of the Montage.

The properties, which appear to be a combination of parking lots and vacant lots, are located on Brooks Avenue, Boylston Street, Stadium Way and two on Lookout Drive.

So what's it all about? Does McCourt make out better than he already has, if that's possible? Or is this as simple as a clarification of previous ownership?

It sure seems as though Guggenheim and McCourt are cozier than anyone might have expected when he announced he was selling the team. I'd be upset if he left and were allowed to retain a parking space.

The Guggenheim investors haven't said much, but they've been quick to say McCourt can do nothing here without their permission. They didn't say they haven't already given him permission.

We don't know, and by the time we learned everything about McCourt, the Dodgers were in ruins.

So many questions, so many fans wanting to embrace the Dodgers again and McCourt is still sitting in Dodger Stadium. And he's even gaining ground.

The Dodgers win. Everyone is happy. And all you really need to know about the new owners is that somewhere in New York right now, Magic is smiling.