9 Ways to Save Money on Gas 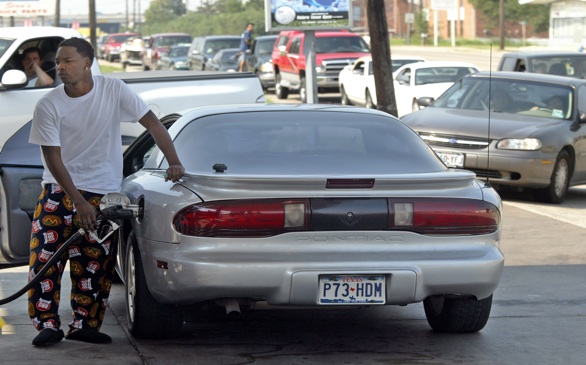 If the surge in gas prices has you hyperventilating, well, you’re not alone.

And the experts are predicting it won’t be over for awhile, what with the price speculation over the tense situation in Iran and other factors designed to gouge us at the pump.

But here are ways you can save regularly on your gas bill, even if you don’t want to buy a new hybrid or Smart Car.

CUT YOUR SPEED. This is the easiest way to dramatically reduce your gas bills. Just stop driving so fast. Driving 55 mph on the freeway instead of 65 is estimated to burn 15 percent less gas. And, no, people don’t hate you when you drive slowly on the freeway. They hate you when you drive slowly in the fast lanes. Just stay to the right and remember the parable of the tortoise and the hare.

PAY CASH. Many gas stations will give you money off if you pay cash instead of using credit cards, so carry around some cash in your wallet. Arco stations are generally cheaper as well, because you can’t use credit, though you’ll have to pay 35-45 cents if you use your debit card.

JOIN A WAREHOUSE CLUB. Sam’s Club and Costco routinely have the lowest gas prices in my neighborhood and you can get money back too if you belong to the appropriate membership level. Costco will let you use your American Express, unlike other cheap gas stations. And using a debit card at Sam’s Club doesn’t cost you like it does at Arco. Sam’s Club will let you use a Mastercard, too. (But no Visa)

STOP IDLING. You waste a lot of gas idling, so cut your engine if you’ll be stopped for more than a minute. The air we breathe will thank you, too. Idling wastes a quart of your gasoline every 15 minutes. You could even walk into the fast-food joint instead of doing the drive-through, in which case you’ll burn off 5 of the 2,000 calories you’re about to consume.

EMPTY THE TRUNK. I just did this, after I nearly had a conniption fit at the gas pump. The EZ UP I’ve been carrying around and all that other junk in the trunk just went back in the garage where it belongs. There’s no reason to haul around extra stuff, it just sucks up your gas mileage.

MAKE SURE YOUR TIRES ARE PROPERLY INFLATED. Underinflated tires will require more gas for your engine to push them along.

USE GASBUDDY.COM. This site will show you the cheapest gas around you today in real time.

SAVE 10 CENTS A GALLON WITH RALPHS AND KROGER POINTS. You can collect points on your Rewards cards at Ralphs, Lucky, Kroger and other grocery stores, and then use them to get the discount at participating gas stations.

PLAN YOUR TRIPS. Think about what you need to do this week and organize your trips so you’ll drive less. Do errands clustered together geographically so that you do everything in the same neighborhood at once.