A New Spirit in the Desert for Coachella 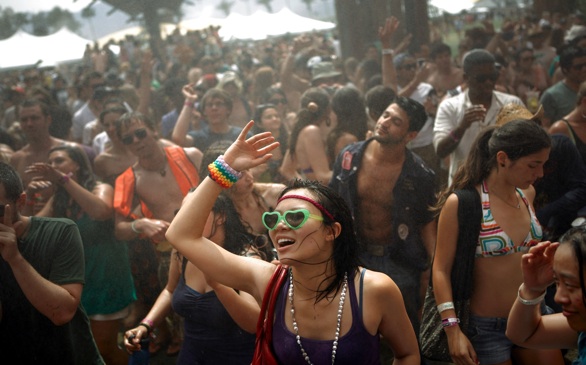 LOS ANGELES — Those of us who attended Coachella in 2010 understand the reasons why the annual music and arts festival had to change.

Two years ago, the three-day concert in Indio, Calif., was so overcrowded with sun-baked, drunken revelers that many of those in attendance vowed to not return. And if you were lucky enough to have access to the VIP area, it was so packed that many under that giant canopy felt more claustrophobic than important.

This year? The festival, which begins Friday and features headliners Dr. Dre and Snoop Dogg, Radiohead and the Black Keys, has thankfully reduced the number of tickets for sale (a smart move implemented in 2011 by the promoter, the AEG-owned Goldenvoice) and — for the first time in its 13-year history — expanded from one weekend to two.

In doing so, this pinnacle of cutting-edge, outdoor concerts has the potential to not only prove enjoyable again but also to morph into a much larger cultural event. By keeping top talent and fans in or around the vicinity for nearly two weeks, the festival will expand on its role as a trend-setter both musically and culturally, and other festival promoters will certainly be paying attention, especially since Goldenvoice recently purchased 280 acres of land at the festival site.

This new Coachella model, which reveals a strategy by Goldenvoice to virtually own the springtime rock and electronic dance music season in Southern California, does come with some risk. The charm and eclectic nature of the festival could quite easily be crushed under too much of everything, including additional Goldenvoice gigs in between (and on either side of) the weekends featuring various Coachella performers.

Still, the festival’s roster encompasses 120-plus artists representing some of the best popular music and emerging subgenres out there in a less-crowded setting. That potential alone is enough to make up for the problems of the past. Here’s a sampling:

—Fading into view
One of the most anticipated performances of 2012 will be by the beguiling Los Angeles group Mazzy Star, which reformed last year and is on the verge of releasing its long awaited follow-up to 1996’s “Among My Swan.” The duo of Hope Sandoval and David Roback (who now lives in Norway) have roots in Los Angeles music stretching back 30 years. The two formed Mazzy Star in the late 1980s and broke into the mainstream with “Fade Into You” in 1993, but had been completely silent until they released the fantastic return-to-form double-sided single “Common Burn” and “Lay Myself Down” in the fall of 2011. According to Sandoval in interviews, the group had never really broken up, but had merely taken a (long) break. This will be among the group’s first live performances in more than a decade and will also feature original members Keith Mitchell and Suki Ewers; the band began winding its way down the West Coast earlier this month, starting in Petaluma, Calif., on April 6.

—The kings of rock
Over the course of seven albums, the Akron, Ohio, duo the Black Keys has gradually — and with much elbow grease — become one of the best flat-out rock and/ or roll bands in the country. The Keys are a solid, confident group that draws from Captain Beefheart and the Beatles with equal aplomb. Their newest album, “El Camino,” entered the Billboard album charts at No. 1 and, perhaps more important from a commercial perspective in 2012, contains some of the most licensed-for-advertising music of the year. Live, the band expands to a full rock outfit, and the resulting pummel is as steady and relentless as it is catchy.

—Mixtape master
Few performers have attracted as much buzz and critical adoration in the last year as Toronto producer and R&B artist the Weeknd. His three free mixtapes became the talk of 2011 and his work with rapper Drake has resulted in the kind of buzz money can’t buy. The brainchild of an elusive producer named Abel Tesfaye, the Weeknd offers a mix of hip-hop rhythms and smooth R&B bumps, then combines it with indie rock’s love of the loud-quiet-loud dynamic. The result is bridge-building music that connects many disparate subgenres under one umbrella.

—For the common people
Coachella is a festival whose attention to history is laudable, a reflex that finds purchase in the astounding reunions it books — and facilitates. This year, fans are giddy about the return of Brit-pop dandies Pulp, whose lead singer, Jarvis Cocker, is one of the most charismatic frontmen in rock, and whose anthemic inclinations have created amazing sing-along moments. Few performances will be more anticipated than Pulp’s of “Common People,” one of the great songs of the 1990s. Other notable returns: Swedish hard-core band the Refused, whose reunion after a 14-year hiatus should have pit-bouncers nervous; Los Angeles post-punk group Firehose; and Montreal instrumental band Godspeed! You Black Emperor.

—The real deal?
One of the unlikely hits of 2012, Australian singer Gotye’s “Somebody That I Used to Know” is a sticky minimal pop song with a melody that transcends oceans. You’ve heard it even if you don’t know it. His sets at Coachella should go a long way toward predicting whether he’s the real deal or a one-hit wonder. The same could be said about a number of acts on the bill, including Justice, Calvin Harris and Martin Solveig, all of whom are looking to harness their hit tracks of days past toward continued glory.

—Not quite J.D. Salinger
Few would have predicted that Jeff Mangum’s 1990s band Neutral Milk Hotel would have as influential an afterlife as it has. After releasing two psychedelic indie pop classics, Mangum vanished for a decade while the myth and importance of his work gradually expanded. Though some were worried that he’d end up rock’s version of J.D. Salinger, his 2010 return overjoyed his obsessive fans, many of whom will be making the trek to the desert to see his first appearances on this coast since Neutral Milk’s first go-round in the ‘90s.

—Power talker
The hip-hop roster at this year’s festival is impressive and features not only Southern California kings Snoop Dogg and Dr. Dre but also a reunion of influential late 1990s underground New York duo Company Flow, trippy instrumental music from beat producer araabMUZIK, as well as the king of instrumental hip-hop, DJ Shadow. But it’s the upstarts that are drawing the most pre-fest enthusiasm, most notably the New York rapper Azealia Banks, whose breakout hit “212” set the bloggers slobbering and the major labels kicking at her door. The 20-year-old, who’s whip smart with rhymes and has great taste in avant producers, has signed with Interscope and is working on her debut. The question is whether she can back up her singles with a full album of bangers.