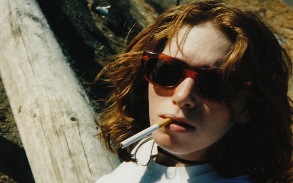 Hit So Hard follows the life of Patty Schemel, the original drummer and one of the founding members of the ‘90s grunge band Hole. An intense story of rock, fame, sexuality and heavy drug use, the film offers an interesting perspective on a highly volatile period in music history. Particularly focused on the struggles of Schemel, the audience is taken through the highs and lows associated with her harrowing journey through triumph and misery.

Beginning with the inception of Schemel’s band, Hole, Hit So Hard depicts the drummer’s rise to fame as a grunge musician. Culminating in her eventual demise, the film takes the viewer inside the head of a successful artist that played a part in an emerging scene, and bore witness to enormous tragedy.

The story of Schemel’s musical career is no doubt compelling, but what makes this film particularly interesting is the context. Set amongst the backdrop of Washington’s grunge scene, the film goes on to touch upon the deaths of both Kurt Cobain and Hole’s original bassist, Kristen Pfaff. Through the array of archival footage featuring live performances and past interviews, Hit So Hard gives the viewer a candid image of a very distinct time in music.

Although the subject matter is often quite heavy, the film brings with it a certain sense of levity. Tough issues such as drug use, death and abandonment are tackled with a distinct humor that serves to humanize the band members that were interviewed. Particularly humorous are the interviews with Courtney Love. Her perspective is fresh and honest as she maintains the persona of an outrageous, loose canon.

The film originated as a collaborative project between director P. David Ebersole and Patty Schemel herself. It began when she gave Ebersole a collection of 40 plus hours of never-before-seen footage of the band. Using that as the backdrop for their film, Ebersole proceeded to collect current day interviews from the band members, their friends and family. The resulting production is a well-crafted venture, complete with bone-chilling scenes resurrected from the past.

Aside from being a good story, Hit So Hard brings with it a certain unique style. Using color adjustments, split screens and erratic jumps from present to past, the film captures a feeling of grunge that really sticks with the viewer. It is an appropriate effect for depicting the viewpoint of Schemel and her drug-fueled plummet to rock bottom, and her struggle to recover thereafter.

For fans of grunge and those of you who would really dig seeing some old school footage of the Seattle music scene in the early ‘90s, this movie is a must-see. Even for those that haven’t had Hole stuck in their head at one point or another, the candidly portrayed story of Schemel is both compelling and inspiring. A humble memoir about a seldom regarded, yet influential rock drummer, Hit So Hard is an eye-catching feature that is well worth your time.

There will be special events all opening weekend long including Q&As, live music performances and super secret special guests.