Think Like a Man Gives a Glimpse into the Opposite Sex 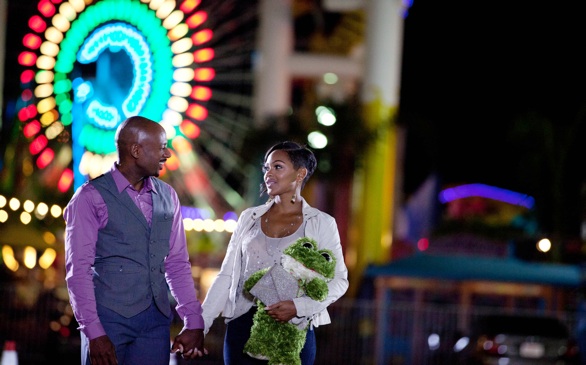 Questions about romance and love are vast, and have plagued mankind forever. Men are constantly trying to understand what makes women tick, and women are always trying to figure men out.

These struggles are the central focal point of the comedy, Think Like A Man, and the movie proves that the road to finding answers to these questions and to understanding the opposite sex is not a clear-cut or direct path.

Think Like a Man, one of the biggest ensemble romance films in a long time, is based on the best-selling book Act Like a Lady, Think Like a Man: What Men Really Think About Love, Relationships, Intimacy, and Commitment by comedian/actor/television host Steve Harvey. What becomes clear over the course of the movie is that men and women come from completely different places when it comes to love.

A new surefire hit of the season, Think Like A Man is a story about what happens when a band of brothers finds out that they have been betrayed by one of their own, conspiring to use the book’s teachings to turn the tables.

If the impressive cast roster isn’t enough to get you into the theater, you should also note that the film is the product of director Tim Story (Fantastic Four, Barbershop), and was written by Keith Merryman and David A. Newman (Friends with Benefits).

Knowing that Story was involved was enough to convince Michael Ealy – who plays Taraji P. Henson’s love interest, the cash-strapped, up-and-coming chef Dominic – to sign onto the movie.

“I had just filmed a comedic pilot and a very serious special effects movie, so to be able to jump into a romantic comedy was a good challenge for me,” said Ealy. "I started [my career] with Tim [Story], so it was an instant go."

Story seconded the sentiment. “Michael [Ealy] and I go way back,” he said, “We started out with Barbershop together, so working with him is a complete dream. He’s such a smart actor. We actually spent probably most time outside of production just talking about the characters.”

One of those characters is Zeke, played by Romany Malco. Malco believes that most men – like his character – have two dimensions, and often have a blind side.

“Zeke is unable to see the areas in which he’s shallow: the areas that require vulnerability and accountability,” he said. But for Zeke, this actually works to his advantage. “Because of the way he presents himself, women tend to give into him rather easily.”

When Zeke meets Mya, played by Megan Good, a woman who has set standards for herself, he doesn’t know how to contend with that.

“Love is supposed to be cherished, and Zeke feels that women have expectations that oftentimes aren’t reliable, which can create issues in a relationship,” added Malco.

While Ealy and Malco have integral roles in the film, Story felt that Kevin Hart “steals the show as Reggie. He really thought of every nuance of his character, what was going on in the scene, and bringing something to it that pumped it up.”

While Think Like A Man boasts a predominantly African-American cast, Story stressed that the material isn’t about any particular race, culture or class of people.

“There are universal themes about relationships, and how men and women feel, think, act and love,” he explained. “Think Like A Man represents what I think most couples are going through today.”