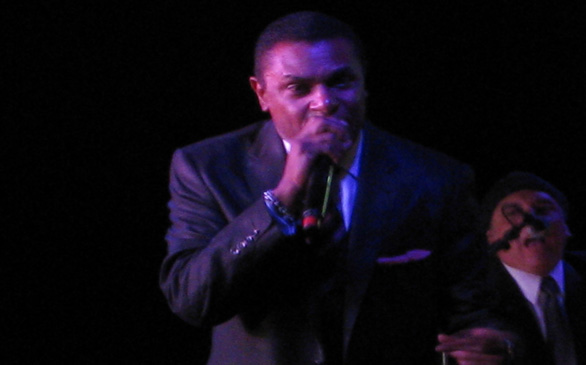 Dominicans are known for merengue and bachata, but there are excpetions to every rule. Such is the case with salsa legend Jose Alberto, who recently performed at the Conga Room at L.A. Live.

Alberto, nicknamed “El Canario” (The Canary), brought his passion and energy to the stage right from the beginning of the show when he performed his hit, “A La Hora Que Me Llamen Voy” (I’ll Go At The Time They Call Me). The upbeat tune initiated a night of romantic salsa.

Dressed in a classy black suit, Alberto continued singing in pleasing fashion with “Disculpeme Señora” (Excuse Me Mrs.), “Sueño Contigo” (I Dream of You) and “Paella,” which showcased his impressive whistling skills. He definitely made it clear where he got his nickname from!

Another solid track came via “Mis Amores” (My Loved Ones), which caused Alberto’s fans to erupt into cheers and claps. To close out, he performed “Bailemos Otra Vez” (Let’s Dance Again). His adorable voice, one that has conquered people’s hearts, shone prominently in this piece, and his dancing ability and gestures with the crowd were an added bonus.

Despite his nation’s musical background, he has accomplished a lot throughout his career with salsa. “El Canario” moved to Puerto Rico at the age of 7, and then relocated to New York. Both places are well decorated in salsa traditions, so this could explain his compelling emotion in the genre.