Ready to Unleash Some Pent Up Energy: The Hives are Back 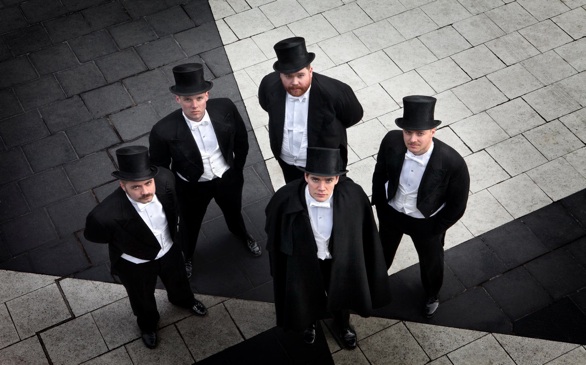 On the phone, there is something eerily calm about Nicholaus Arson, who plays guitar and sings backup vocals for the Hives. He has a humble, deep voice that a naïve American might confuse with a Russian spy. But then again, many Americans may not be used to his type of garage-band, high-energy glam-rock imported from Sweden --so it may seem shocking to watch Arson and the rest of the band jumping and thrashing onstage in full-on epileptic sweat when they perform.

Almost five years in the making, their newest album, Lex Hives, is set to be released June 5, and it looks like the band will be busy touring around the world with SoCal stops at Coachella and Pomona.

But for a band with such humble beginnings, it’s interesting to hear from Arson how a group of teenage boys (merely 14 and 15) from a small mining town managed to be named one of Spin Magazine’s Best Current Live Bands.

“All the music we listened to was rock 'n' roll, and we grew up on the Dead Kennedys and stuff like that. We started early on, as kids,” said Arson, whose influences include the Black Flag, the Saints, ACDC, the Ramones and countless legendary rock groups from the U.S. and Europe.

“Bands would sing rock songs from the ‘50s, even if they didn’t know the language; they would phonetically learn them. Other bands were doing it, and they would get to tour the whole world. We wanted to get out and tour the world.”

Twenty years later, the same kids in the same band are living the dream, touring and playing shows a long way from their small hometown of Fagersta, Sweden (population: 12,000, literally located between two railways).

The proximity to the railways always infused the group with the promise of escape, and the train that enabled that was music.

“We were 14 or 15 when we started the band, and we never thought we’d go past playing at 21,” said Arson. “Our goal was to do a tour, and it didn’t matter where that tour would have been. We grew up in a very small town, so basically we had no other distraction.”

He also explains how the band managed to keep all the original members intact.

“Even if we wanted to exchange band members we really couldn’t. They’d leave for a couple of days, come back and we’d be a band again.”

Arson laughs a little reminiscing about this, as if it’s a surprise to him. It’s a very discreet emotion compared to the Hive’s live antics on stage.

They’ve been known to banter with the audience with a “we don’t give a fuck” type of air, jumping into the crowd and running all over the stage. This, for Arson, is the music taking over.

“The music is something that moves us, and it never sounds as good unless it’s physical. So we move around fast. We grew up with bands with high energy and who go completely nuts. We always have been attracted to bands that made the effort to almost scare you,” said Arson.

“I could never think of anything more fun to do than to jump around and scream. If you get money to just jump and scream, it’s the best job in the world. We enjoy it so much that we can’t help it.”

Judging from the way the Hives exploded onto the world stage from their small Swedish town, the calm nature of Arson’s voice should mean he’s saving his energy for something truly beyond what we’ve seen before.

The Hives will be performing a string of concerts in California: at Coachella April 15 and 22, at the Glass House in Pomona on April 16, at Belly UP in Solona Beach on April 17, and at Warfield in San Francisco on April 18. Can’t make any of their live shows? Catch them on “Jimmy Kimmel Live” on April 23.