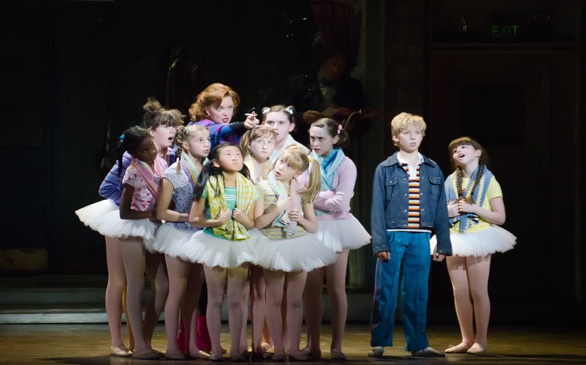 While parking near the Pantages for the L.A. premiere of "Billy Elliot the Musical," I saw another theater marquee that said, “Dedicated to those who  have the courage to follow their dreams.” I’m not sure if that theater owner was speaking about the thousands of folks who head to Hollywood each year to “make it,” or if s/he was speaking directly about the story of "Billy Elliot," where a young lad in a northern mining town in England defies all the odds of his surroundings to become a ballet dancer.

Based on the uplifting and inspiring movie of the same name, also directed by Stephen Daldry in 2000, the stage version brings the Brit’s sarcastic humor and working-class crustiness and mixes it with high art, superb dancing by the young cast, and enough toe-tapping songs by Elton John and glitzy dance numbers to qualify it as Broadway spectacular.

The film version is much more touching and nuanced than the musical, but the stage version does find a way to blend a coming-of-age story, a political history lesson and a social commentary on everything from unions to homosexuality, with enough moments for both tears and laughs in its three-hour run time.

Billy is the motherless child of a hard-shelled miner (played by Rich Hebert) with an angrier than thou brother (played with true grit by Cullen Titmas), and a senile old granny (Patti Perkins). His life is changed when he meets his dance teacher Mrs. Wilkinson, portrayed by Leah Hocking, a British broad worthy of the TV show  “Absolutely Fabulous.”

The character of Billy is played by a different boy each night, from a revolving cast of four young men. Ty Forhan, who portrayed Billy on opening night, was spectacular as both a ballet and tap dancer, able to spin 32 pirouettes --if I counted correctly.

When the national miners union goes on strike against Margaret Thatcher’s oppressive government in 1984, times are pretty harsh — with violence, poverty, identity politics and broken families becoming a part of everyday life — and it is all played out on stage with a cast of men, who portray both the cops and the miners, and an agile group of kids who drop f-bombs like gum wrappers.

One day at the local school gym, where he should have been taking a boxing class, Billy encounters the ballet teacher who taunts him into joining her class. While the miners spend a year on the picket lines, Billy and his teacher spend the same number of hours in a studio perfecting his innate natural talent to prepare him to audition for the Royal Ballet Academy. Money and social mores lend the usual boundaries to small town boys in the arts, but through a solidarity that relates the life of artists to those of the workers, the town pulls together and gives their young ingénue a chance at a new future far from the dwindling town prospects.

In addition to the suberb dancing, acting and singing, what you can take away from this play is that the Brits are freakin’ great; whether they are telling you to “sod off” or “piss off,” they make you take strife in stride and find some humor and hope in even the bleakest situations.

"Billy Elliot the Musical" is playing now through May 13 at the Pantages Theater, 6233 Hollywood Blvd., Los Angeles. Tickets start at $25, and can be purchased here or by calling (800) 982-ARTS.