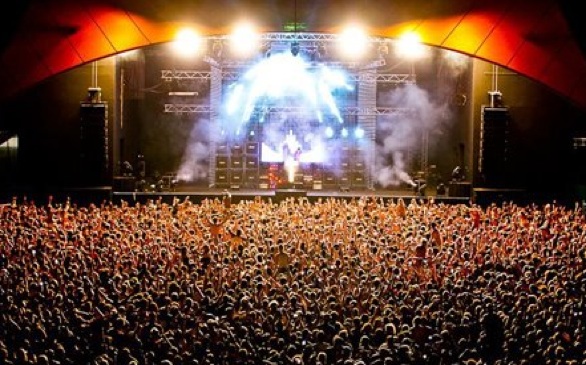 Justice emerged on the scene in 2007 with what became the quintessential anthem of anyone who wanted to just let go and dance –the song tells you to do it and your body can’t help but obey.

Such is the power of Justice. The French pop-electronic duo helped spawn the electro-house renaissance that now currently engulfs mainstream radio stations, and their latest release, Audio, Video, Disco keeps the momentum going. Now, Gaspard Augé and Xavier de Rosnay are taking their gospel of D.A.N.C.E all over the world.

Campus Circle chatted with de Rosnay on experimentation, Justice fanatics and whether they ever had a bad show.

Campus Circle: Have you experimented with new sounds or beats recently?
Xavier de Rosnay: Yes and no. Everything we do is always a bit of an experiment. The process of making these songs required us to experiment as we naturally evolved, and thus had to do things we’ve never done before. We like the idea that good experimentation is seamless. We knew before we started this record that the way we produced our first album wouldn’t work for Audio, Visual, Disco, so we built another studio and produced it in a different way.

CC: What is the process like? Does the music just come to your head?
XDR: Well for the album, we were influenced by many different things. The aesthetic of the record was driven mainly by images and sensations, a feeling that we wanted to convey. Within the tracks there’s also some musical influences. All the music we’ve been liking and listening to from our childhood to now constitutes our sensibility as musicians, and gets out when we make our own music.

CC: That's interesting that even music from your childhood influences you now. Was that a big source of inspiration?
XDR: Yes, that’s an inspiration you can't really go against. Music that we’ve been listening to as kids is almost part of our DNA, like everybody. It’s what constitutes the foundations of our tastes in music; in our case it was mainly French pop music. As a kid you like things without knowing why, which is the good reason. You don't like something because it s cool, or trendy, but just because it’s music that touches you, and this stays with you all your life.

CC: How do you get ready for a live show?
XDR: For the live show, all the music is already there. What makes it what it is, and sometimes a bit different from the album versions, is more driven by the technology and the solutions we find to perform this music, which makes it impossible to reproduce exactly what’s on the album.

CC: When you play, are you releasing some frustration, happiness or strong emotion?
XDR: Generally, a good live show is a concert where people are receptive and send a lot of energy, which changes the energy we put in performing the songs.

CC: Have you ever had a bad live show?
XDR: Yes of course, it happens sometimes. Sometimes we don't play well; sometimes we’ll play ok but with no energy because we don't manage to get this synergy with the audience; sometimes it doesn’t happen for technical reasons. Most of the times, there’s always a moment in the show when we normally manage to get the audience into it, but not always [laughs].

CC: How do you take it when people say Justice brought house/electronica to the American mainstream?
XDM: I’m not sure how much it’s true, because we are not mainstream ourselves, but if it’s somehow true, it’s great. We always say it’s a sort of pop music of today, even if it has nothing to do with the actual mainstream pop music. But it’s pop in the sense that its aim is to convey simple emotions. The music we love works like this, so we try to do it this way too.

CC: We’ve seen people sporting Justice cross tattoos. What do you think about that?
XDM: It’s crazy indeed, and we are always amazed when we see people going to that level of commitment, but it’s great in the sense that if the music we make was significant enough for them that they got tattoos or got influenced or anything like this, it’s an amazing compliment.

Justice will be performing at Club Nokia on April 18, as well as at the Coachella Valley Music and Arts Festival on April 22. Tickets for the Club Nokia show are $50, and are available for purchase here.