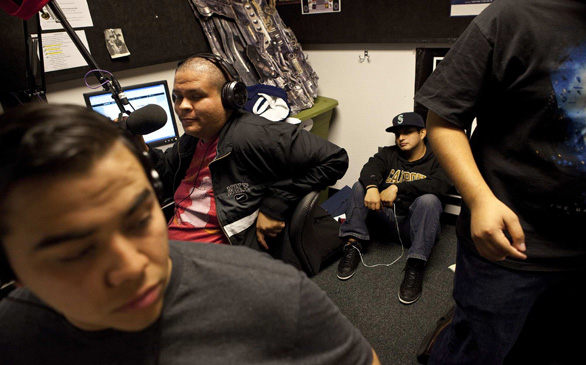 Seconds before showtime, the DJ took his place before the bank of monitors, switches and dials. He took a deep breath, a light flickered on above the door. Waffles was on the air.

"It's the best in rock!" he said into the mic. "Let's start things off right!"

With that, he kicked off a rollicking two hours on Mt. Rock Radio, the student-run station at Mount San Antonio College. Howling guitars and heart-pounding percussion pulsed through the airwaves.

The spiky-haired host, zinging with frenetic energy, drummed his fingers to the beat and sang along as he worked the boards and set up the playlist - Thin Lizzy, Joan Jett, The Ramones. And the mandatory Lynyrd Skynyrd's "Freebird."

Before Mathew Bissontz became Waffles just a few semesters ago, he had no idea what he wanted to do, never even considering a life in radio. Now, though, he was arriving at the station so early he had to find a janitor to unlock the door, and staying so late he was often the last to leave.

Waffles, 20, belongs to an unofficial tribe of hundreds, even thousands, of radioheads hooked on their college station. They willingly sacrifice friendships, free time, studies, sleep and perhaps their sanity, just for the chance to learn the art of broadcasting.

While hundreds of campuses - from the Ivy Leagues to community colleges - run their own stations, a number of cash-strapped colleges have discovered they are sitting on something of a goldmine. As broadcast licenses have become harder to come by, some colleges have been selling them to professional broadcasters or other universities, and moving student programming to the Internet.

Rice University in Houston sold its license, tower and frequency for just below $10 million, and the University of San Francisco sold its license for $3.75 million. Many, including Vanderbilt University in Nashville, have been turned into public radio stations. The call letters for KPCC, for instance, hark back to its former home, Pasadena City College.

Mount San Antonio nearly became one of those schools. Administrators said closing the FM station had been considered during recent budget cuts, but students and broadcasting instructors were successful in keeping it alive.

That's why, on this recent Monday, Waffles was in the booth, his voice warming up into his best Casey Kasem.

After his two hours, he signed off, cut to a break and stepped out of the booth.

"The music was there! The energy was there! I had that whole Johnny Personality thing going on!" he said. "If I could do a whole 'nother hour, I would. But it's someone else's turn to play radio."

A motley crew of more than a dozen broadcasting students has transformed the antiseptic environment of beige walls and berber carpet into a rock 'n' roll Eden on the Walnut campus where they blare classic rock. That is, until the adults working nearby complain - leading to an inside joke: "Turn it down! This is a rock station! We have to be quiet!"

An ever-fluctuating schedule to cover shifts for Mt. Rock and its online-only counterpart Audio8ball.com is written on a dry-erase board. Mt. Rock offers a constant stream of classic rock with a dose of personality, while Audio8ball reflects the off-the-wall interests of the DJs.

Sergio Gomez, an amateur wrestler with WWE ambition, hosted "The Verbal Headlock," where he and his friends commented on matches and gossiped about storylines. Alan Bailey, the operations manager, hosted "The Pit Pass" about NASCAR. Music director Bob Vincent had a show centered on The Beatles, playing the classics, the covers, and anything by the group or their family members.

It isn't possible to keep track of ratings for the tiny two-watt station, KSAK-FM, with a signal spanning about five miles. Some of the shows, particularly online, develop a following. But that is almost beside the point.

Bailey boasted that they have the same equipment as the "big boys," but it was evident the talent wasn't on the same level. Newscasters sometimes mumbled in voices that barely registered over the air, and the occasional fumble left dead air time.

"We expect mistakes," Waffles said. "It's college radio, run by students. We don't expect it to be perfect."

Tammy Trujillo, a radio veteran and instructor who oversees the station, said that's the value of the campus station: Where else can students actually learn the ropes knowing it's OK to mess up? And they do learn, she said, while being "wildly creative - within reason."

Phil Hulett, a morning anchor for KFWB News Talk 980 and adjunct instructor at Mount SAC, remembered his days at Cal State Long Beach's student-run station in the late 1970s - college radio's heyday - and how empowering it was to have a "sense of ownership" at the station.

"We learned how to operate a station, and that was invaluable experience," he said. "I'd be lying if I didn't say there were all sorts of shenanigans going on."

And as professional radio becomes increasingly formatted, he said, students can inject some verve back onto the airwaves. "They have a certain renegade spirit," he said.